lxXXxl said:
Ouch for the treble. Can normal user who don't wanna tinker with EQ use the treble knob to achieve good enough result?

And did you have the unedited FR of the r2000db? I only see the post EQ results posted?
Click to expand...

U mean the graph that shows difference between R2000DB and S-520?

It's a difference graph. Coz I don't have a calibrated mic. Also that is close mic at woofer, so ignore the treble.

One more thing, and perhaps most important:

The reason for the bad sound I heard was due to placement. I had the speakers on top of the S-520, so I was very badly off the vertical axis, plus I did not have boundary gain from the table. The off-axis caused the whole "far away" sound, and the table would have given it more midrange.

When I retested it one day in a normal position, the performance was nothing to complain.

This episode was the reason why I stopped doing the above/below thing in the reviews that followed.
Last edited: Jun 18, 2020
L

wwenze said:
U mean the graph that shows difference between R2000DB and S-520?

It's a difference graph. Coz I don't have a calibrated mic. Also that is close mic at woofer, so ignore the treble.
Click to expand...

So how much does the treble knob help with the brighter sound?

So how much does the treble knob help with the brighter sound?
Click to expand...

Edifier's house sound has a pretty plain/unassuming/boring/(lacking?) high treble. Kind of like A5+. No more adjustment needed.

(Add: This is in monitor mode.)

wwenze said:
Edifier's house sound has a pretty plain/unassuming/boring/(lacking?) high treble. Kind of like A5+. No more adjustment needed.

(Add: This is in monitor mode.)

Cool, good to know. So long as the treble don't sharp until can pierce the sky can le

The default backward-tilting positioning points the tweeter straight at the ear. So I tilted the speaker forward so that the drivers now point flat forward. This gives me the sound that I prefer.

Strangely, this does not show up in measurements, or at most a few dB differences in small places.

Lowering tweeter volume (shelf filter @ 2kHz) by a few dB while tilted back gives me the frequency response that I prefer, but it still sounds dead.

Maybe big speakers "sound big" for the same reason, since they are bigger and radiate sound everywhere.

So here, the tilt backward vs tilt forward becomes a philosophical question. (Or a personal preference question.) Which is better, on-axis or off-axis? Personally, I believe in off-axis.

I did the entire measurement with the 65Hz anti-peaking room correction turned on. F*** me.
Last edited: Sep 29, 2020

Close mic
The more I measure close mic, the more I think it is not an accurate reflection of actual performance. It does give some additional info, like that bass port leakage in the mids, and that this bass port is very high-Q. Like, very peaky. 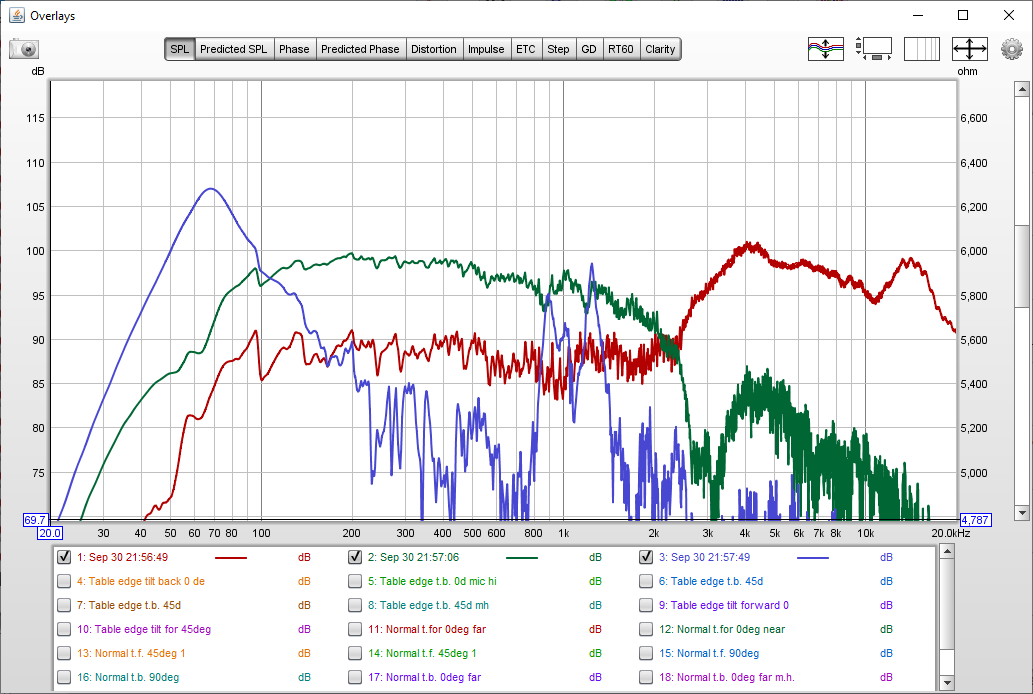 Do note that the port is at the back so actual SPL that you will hear in practice will be lower. 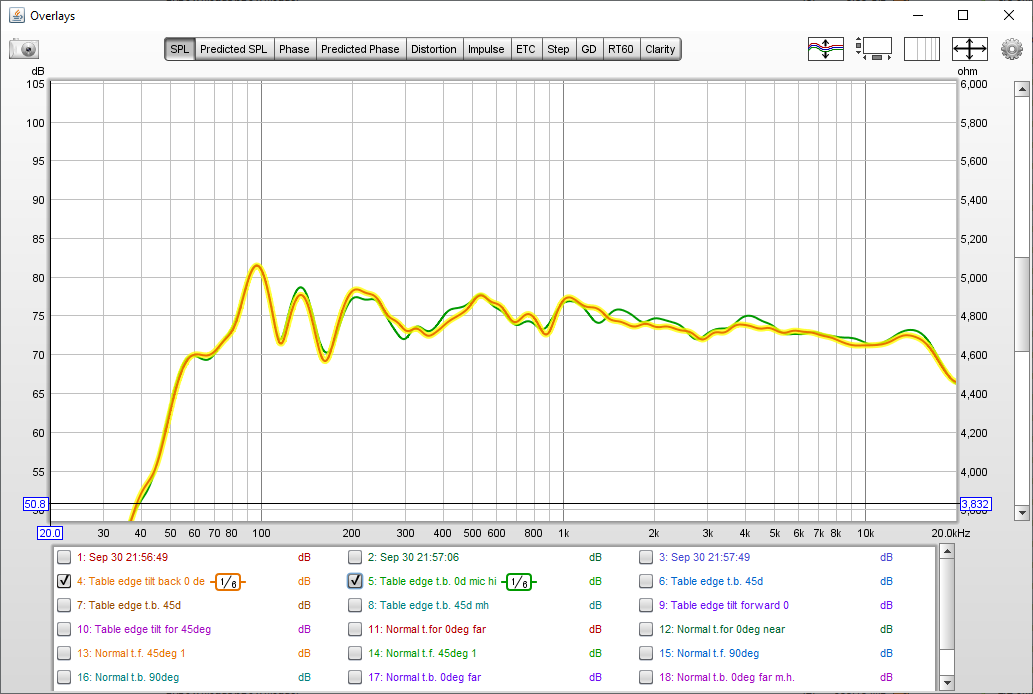 I measured with mic horizontal and mic higher (i.e. on tweeter axis) since this is a tilted back design. Interestingly does not show much of a diff. 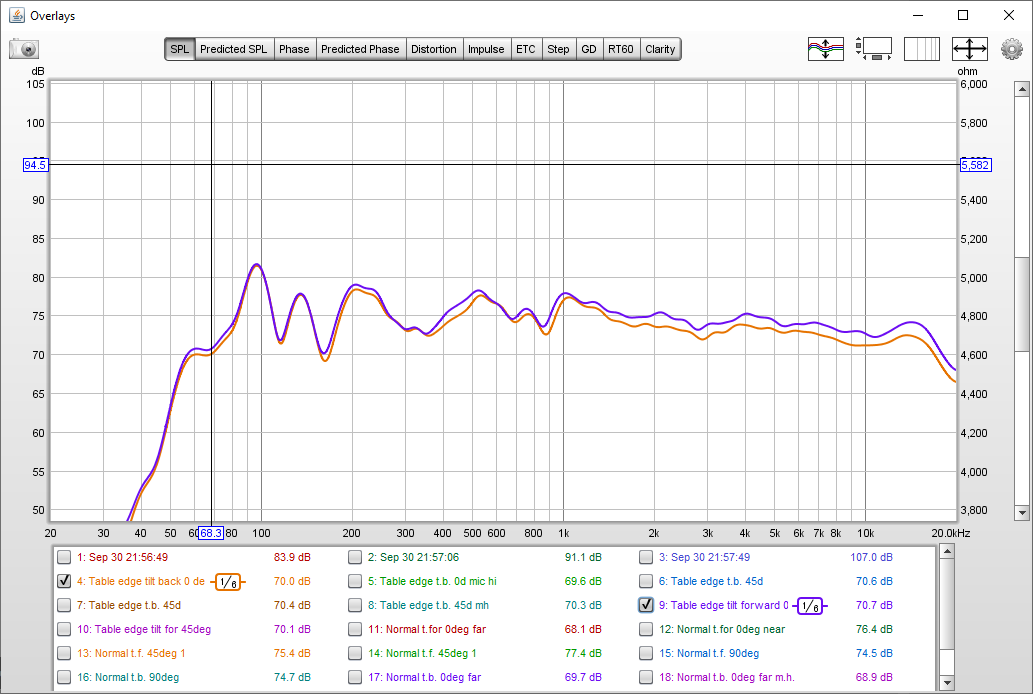 Tilt back but 45 degrees off horizontal axis, mic level and mic higher 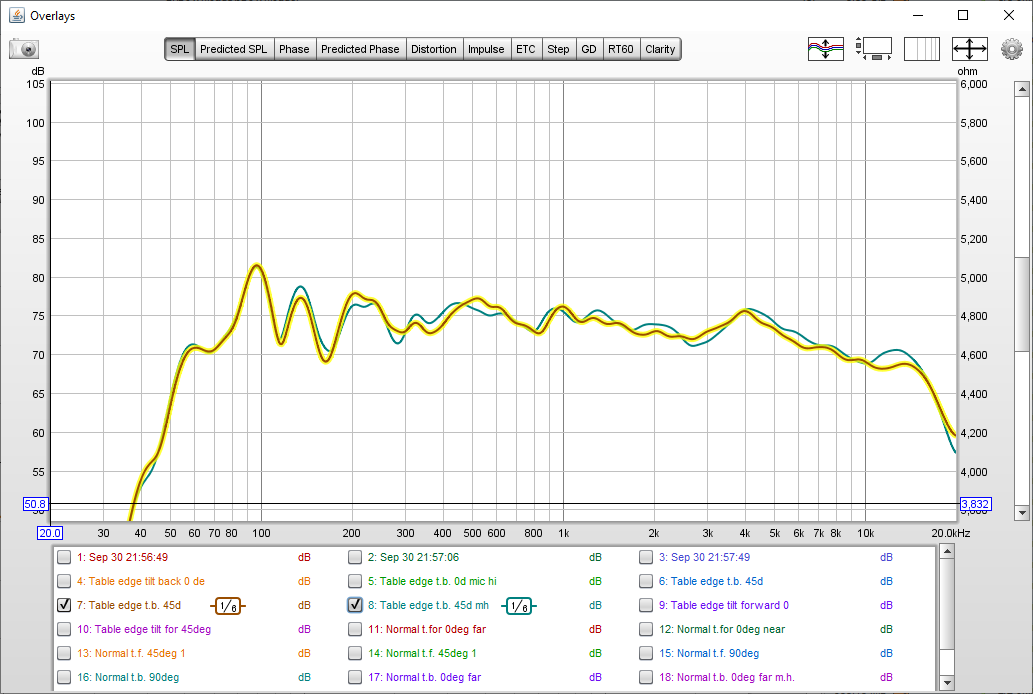 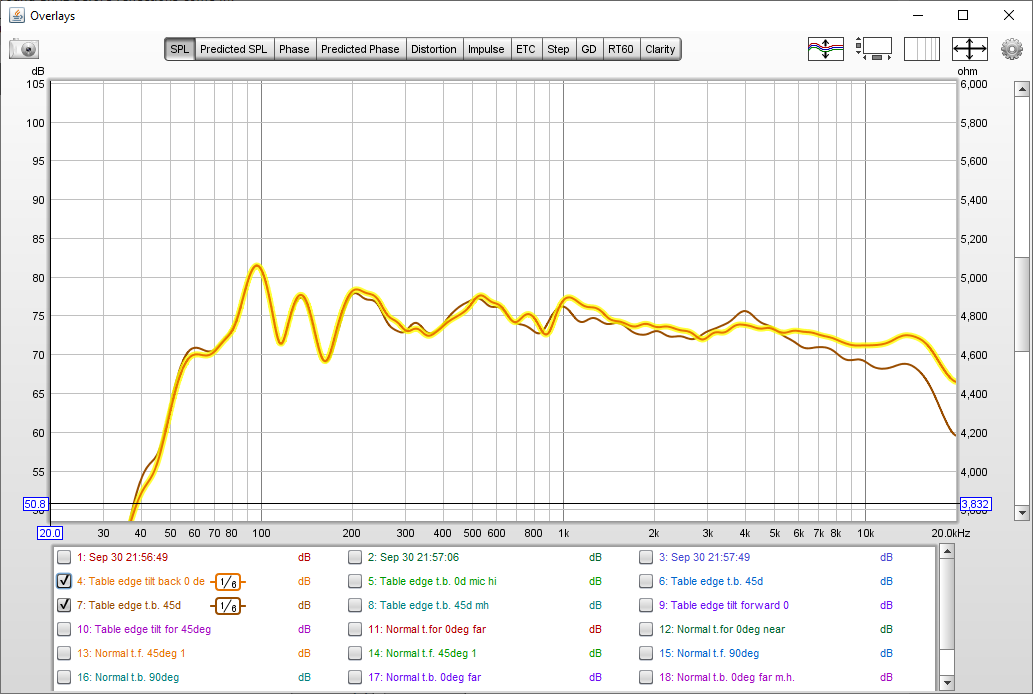 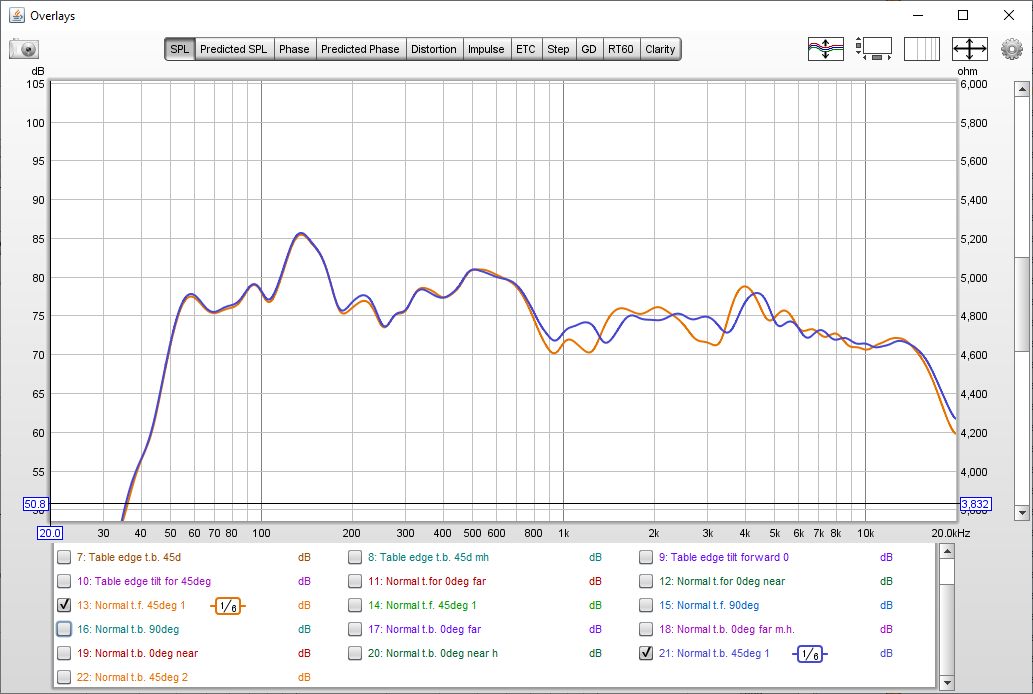 Interestingly, my mic does not pick up any major differences between tilt forward vs tilt back, despite my ears seemingly hearing otherwise.

From top to bottom: 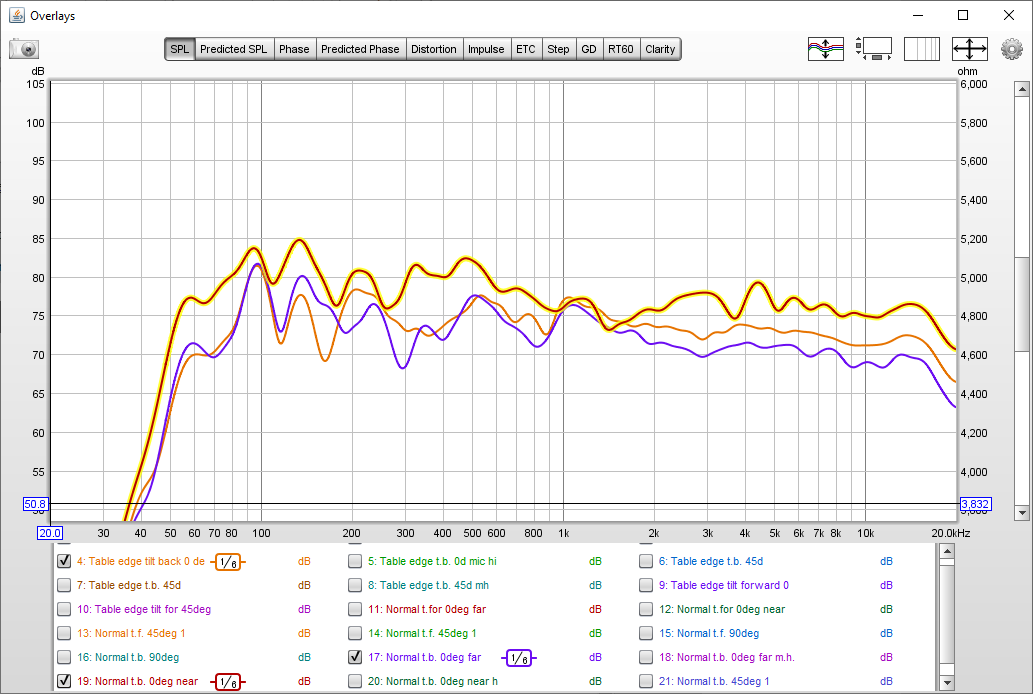 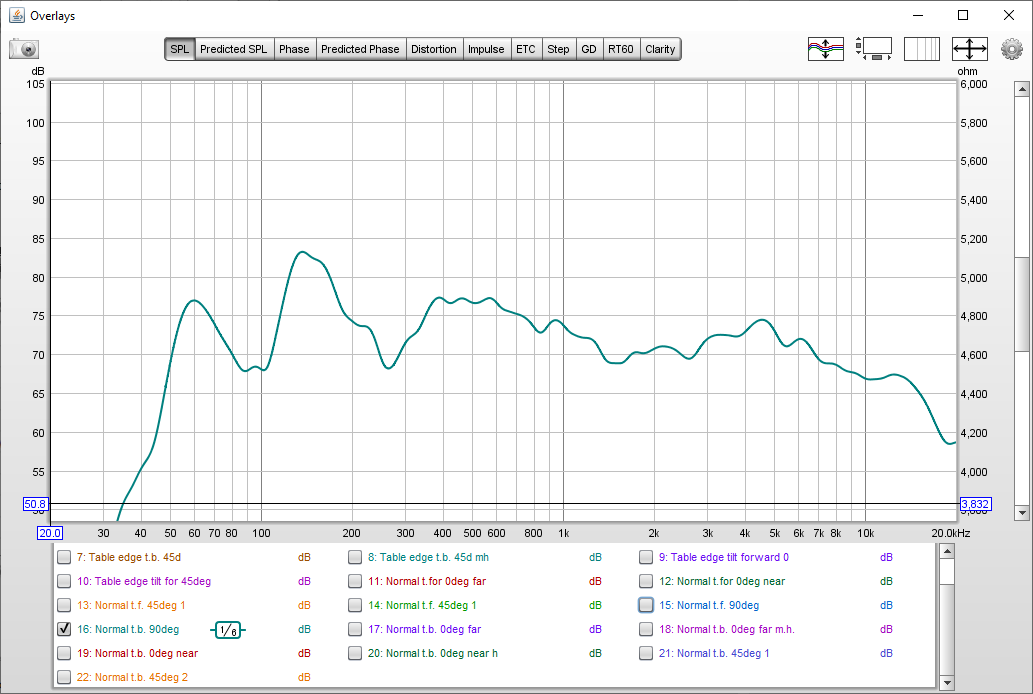 Measurements discussion
As usual, I'm taking table edge as the most accurate representation of the speaker. Treble is, from 1kHz, a gentle smooth downward slope of around minus 2 to 3 dB. No shenanigans like any peak or shelf filter or cutting off too early unless you are very interested in 16kHz. It does have a peak at 14kHz which shows up with close mic.

Below 1kHz it is mostly flat if not slightly decreasing with volume as frequency decreases. Port peak 68Hz so it dies off very quickly past that. My room boost does give it more 65Hz boost however. In fact my room gives it too much boost that I need at least 10dB reduction. This does not get captured well on mic unfortunately.

All in all reflects what I hear pretty closely. Nothing much to say about the treble. Eye power estimates around 4dB variation with no sudden jumps for most of the frequency range. A tiny bit shortage of bass quantity, and the bass starts dying earlier than I would have liked, but that is quite typical for speakers of this size. Actually it is already doing pretty good for the size. And very good for the price.
M

I notice the sound quality improves when using Bluetooth as versus 3.5mm RCA connected to my computer. Would using an optical connection result in the same improvement? Or would I be better off buying a dedicated DAC (and fall in the rabbit hole...)

"Improve" is a human term.

I doubt you can hear a difference between optical in and RCA in.
But the Bluetooth can sound different due to the way Bluetooth encodes the data.
Optical is still better than RCA but I won't pay extra money for it.

DAC is pointless for R2000DB because the data is converted back to digital before being sent to the amplifier anyway.
M

Soz, just noticed this reply of yours. Thanks!

just bought r2000db on impulse as my living room speakers, is it a good idea?
already have the s2000mkiii as my main speakers for pc1 and r1280db for pc 2

How do you impulse buy something so big

If you don't have anything bigger or better for you living room, why not. It's better than the TV speaker at least.

wwenze said:
How do you impulse buy something so big

If you don't have anything bigger or better for you living room, why not. It's better than the TV speaker at least.
Click to expand...

cos 10.10 sale just click buy on impulse when stumble on lazada going for $182.33 after discounts

Is this better than Sonos speaker underneath my TV or better than creative Katana? Not sure about speakers.

stillgottheblues said:
Is this better than Sonos speaker underneath my TV or better than creative Katana? Not sure about speakers.
Click to expand...

No idea about Katana, but the Sonos soundbars are made to be bright for some reason. Maybe makes them "sound more detailed". 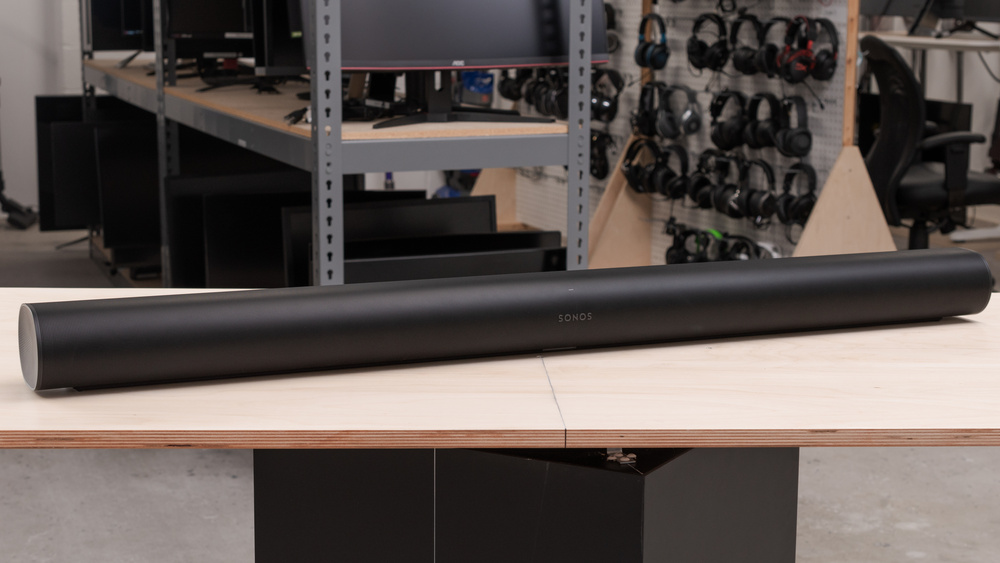 The Sonos Arc is a good overall soundbar from 2020. This standalone soundbar can be easily upgraded into the Sonos Arc with Sub + One SL Speakers with the additi... 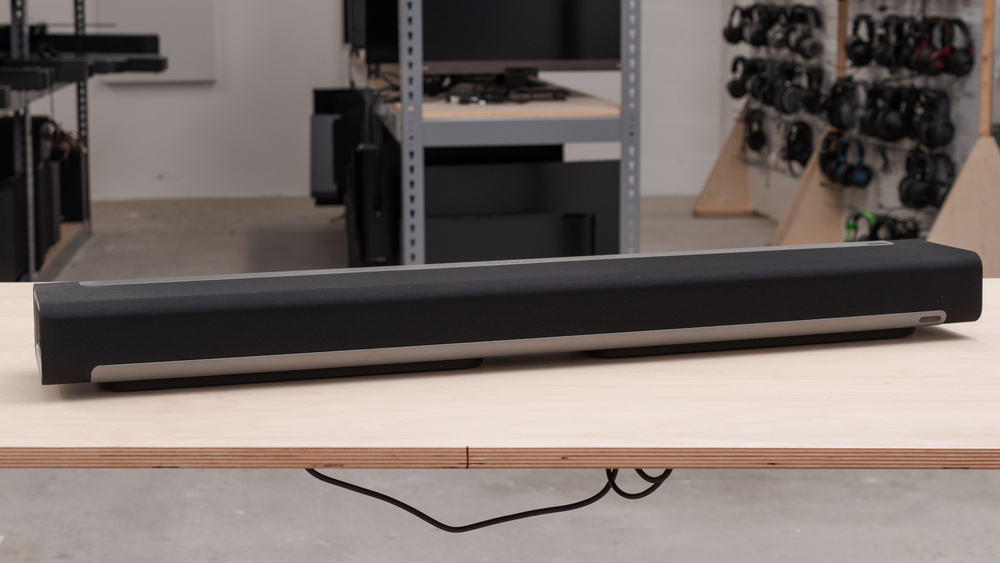 The Sonos Playbar is an older 3.0 soundbar alright for mixed use. Although its sound profile is slightly bright, it still sounds fairly neutral and is good for v... 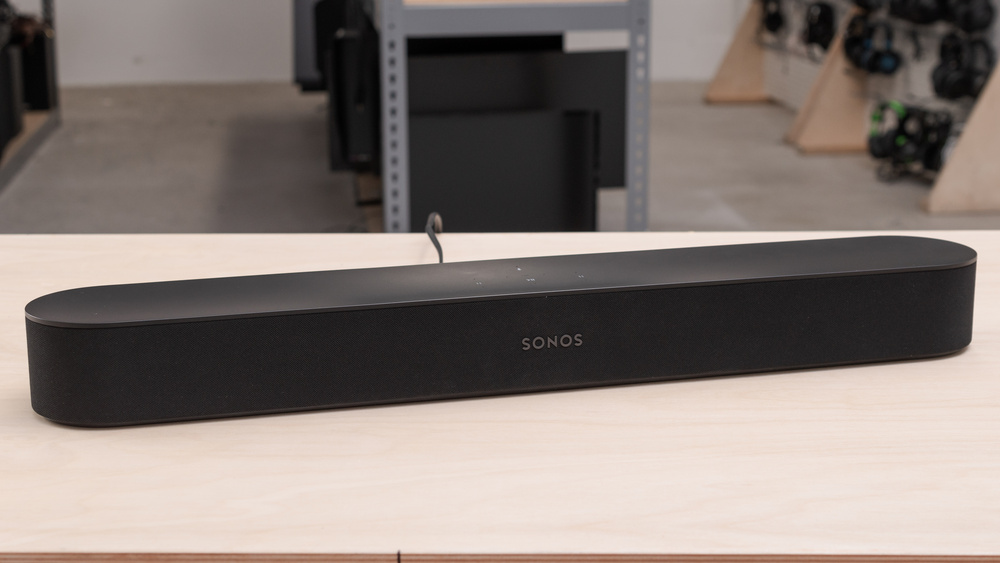 The Sonos Beam is a 3.0 soundbar with a compact design. Out-of-the-box, its sound profile is slightly bright, but it's still quite balanced, making it well suite...

Speaker arrived. Good sound for its price!
You must log in or register to reply here.
Share:
Facebook Twitter Reddit Pinterest Tumblr WhatsApp Email Share Link
Important Forum Advisory Note
This forum is moderated by volunteer moderators who will react only to members' feedback on posts. Moderators are not employees or representatives of HWZ. Forum members and moderators are responsible for their own posts.