terenceboy2 said:
Just died from a 5m hatchet runner swing...he's at least 5 m away and next thing i know i died..the lag is real...haha..
Click to expand...

delfina said:
Until there are Singapore servers I think the game won't be fully enjoyable
Click to expand... 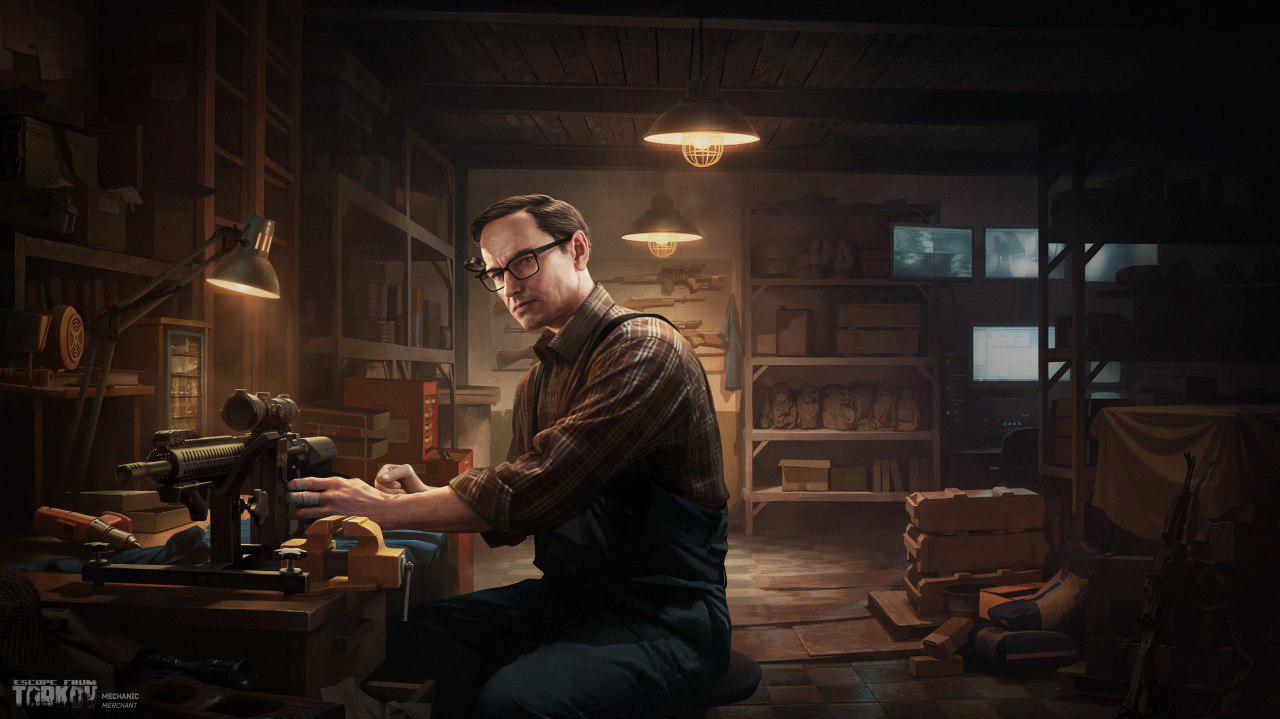 Hello, Escapers!
Added reputation-mending quest after fix of the Stirrup. Unlocked by the Therapist on the following conditions:

1) Skier’s Stirrup is complete
2) Therapist’s Autofix is complete
3) Rep with Therapist is < 0.6
Click to expand...

Escape from tarkov looks and feels much more realistic than Pubg, hopefully the full release will be a good one and SG servers will be up soon

egggkueh said:
Escape from tarkov looks and feels much more realistic than Pubg, hopefully the full release will be a good one and SG servers will be up soon
Click to expand...

I doubt anytime soon. I’ve been playing for days and it seems to be optimised quite a bit.

Hello, all.
Just bought the game a few days ago. Looking to join up a group or team coz some of the missions / quests are just damn impossible to go alone.
BTW, there are SG servers. See your connection log after each sessions. It connects to an SG server, looking like a AWS or Rackspace server. But I still see 200+ ping in game. Bad netcode, I guess.

This update comes with a profile reset/wipe. All bonus gears can be obtained again from your profile.

Basic tutorial
Loading and unloading ammo rounds now require time
Now, the character doesn’t initially know the number of cartridges in the magazine. Check the magazine to see the ammo remaining. Check precision depends on the Mag Drills skill. A full description of the expected behavior can be found here

Loading/unloading of ammo into the magazine does not happen instantly. The time required to load/unload one cartridge may vary depending on the magazine and the level of the new skill, Mag drills.
Time is spent on loading and unloading ammo in the raid only, in the menu the procedures stay the same as before.
Loading and unloading can only be done with inventory open. If you close it or switch tabs, loading or unloading is interrupted. The cartridges that were already loaded into the mag, stay in it (and vice versa in case of unloading).
Only one magazine can be loaded or unloaded simultaneously.
The Info window displays the loading/unloading and mag check speed bonus if it is not 0.
If you’ve started loading an empty mag, or unloading a full one, the precise number of rounds is displayed.
Checking mags, hidden precise number of cartridges in the magazine

By default, it is unknown how many cartridges are in the mag, if it is not examined (hereinafter referred to as "Unknown/Checked"). Mag counter displays an unknown number of cartridges. For example: (?/30)
Check accuracy is determined by new "Mag Drills" skill.
The magazine can be checked either by animation - Alt+T or through the interface by Right-clicking and selecting Check magazine.
If you checked the number on the 0 skill level, then it returns "~empty" - "<1/2" - "~1/2" - ">1/2" - "~full". As skill level 1 an approximate number will be shown. On level 2 - the precise amount of ammo will be provided.
Full and empty mags are considered to be checked.
All the magazines you take into the raid are checked automatically.
Loading/unloading a checked mag doesn’t change the state, it remains checked.
After firing, the number of cartridges in the magazine become unknown.
Ammo check precision now depends on the Mag Drills skill, not on Weapon Mastering.
Outside of the raid, the number of cartridges is always displayed precisely.
If you have dropped a checked mag and picked it back up, it remains checked. If someone picked it up and dropped it again, it becomes unknown to you.
Checking the chamber

The chamber also requires checking. Bnly by animation using the key binding Shift + T.
If you load the cartridge into an unknown chamber, it automatically becomes checked.
If the shot was fired from a checked mag (first shot), the chamber remains checked. Otherwise, it becomes unknown as well.

Fixed bug when bots were trying to attack the player who exited location
Optimizations:

If the magazine of a pump-action shotgun is not examined, it can’t be reloaded
Firing rate is dependent on FPS, this issue will be rectified soon, in one of the next upcoming patches
If there is no space in the backpack and you unwrap the ammo pack, it will lead to the blocking of inventory
Visual bugs of the new location caused by new optimization system will be getting fixed over extensive live testing
Game physics was redesigned, hence possible related bugs (obstructed movement in tight passages, other movement bugs)
"Back" button in the settings can block the interface, to correct this problem it is necessary go to settings, change the language to any other and click "Save".
Click to expand...

anybody still playing? thinking if i wanna buy it
D

I created a discord if anyone wants to play!
https://discord.gg/Hk2btHn
L

Working Microphone and Headset.
No Hacking.
No Elitism or Edgy Attitude.
Speak English.
Respectful and Tolerant

d34th25 said:
I created a discord if anyone wants to play!
https://discord.gg/Hk2btHn
Click to expand...

Currently have over 100 members! Join a channel if you want to play!

how are game population for this currently? watched youtube videos of it and seems really interesting.

kennerv said:
how are game population for this currently? watched youtube videos of it and seems really interesting.
Click to expand...

we have active players in our community discord. see sig for details.

Tomorrow, at 11.00 Moscow time, we plan to start installing update 0.12.9. It will take about 4 hours, but can be extended if necessary.

“Woods” expansion.
Reworked PMC initial gear sets.
Added customization of head and voice when creating character: for now it’s only two new heads for each faction added. You can’t change head and voice after the character is created. You will be able to do it only after profile reset or wipe.
Added skill “Immunity”.
Reworked “Metabolism”.
Reduced the volume of steps and interaction with vegetation.
Added chance to cause bleedings to the ammunition. Now some ammo can cause heavy or light bleeding more often than other rounds.
Now some face shields and glasses will reduce the time of blindness effect from flashbang rounds and grenades.
Players will be receiving letters with a supply package for the first 7 days of playing.
Added “All” button in the purchasing menu when buying from dealers via Flea market. Now you can select all available items with a single click.
Filters in the W-List tab are now modified separately and do not affect other Flea market tabs.
“Enter” button now confirms the action in most dialogue windows.
Slot highlighting when dragging items in your inventory can now be turned off.
Equipped armbands are now unlootable and can’t be lost upon death.
The letter with the reward for the exit in cooperation with the scav will now come with a slight delay.
Containers will apply restriction filters to mods installed on the transported object. I.e., putting a mount with a thermal sight installed on it into a secured container is no longer allowed.
New equipment and clothing is added: PMC tops and bottoms, body armor, rigs, Smoke balaclava, and tops for the Scavs.
Changed the characteristics of a large number of weapon mods.
Simplified the Jaeger quests.
Updated some quests: changed execution conditions, starting conditions, rewards.
Reduced bonus of recoil reduction from the recoil control skill and weapon relates practical skills.
Now character overweight starts at 35 kg. Used to be 40.
Increased purchase limits for some ammo from dealers.

Fixed bots hanging behind stationary weapons.
Fixed a bug where Killa could not hear the enemies approaching from behind.
Other various bot fixes and optimizations.

Aiming a GL40 with Reflex sights.
The position of the character's body when blind firing was not reset after opening the inventory.
Blinding was imposed even if the player used a thermal imager.
The stationary machine gun was removed from its mount if the player used it while in the blindfiring position.
It was possible to use the tops and bottoms of the opposite faction.
The nickname could not be changed if the new nickname was 15 characters long.
The range value of the sight did not change immediately after alignment if the weapon had two sights on it.
A duplicate weapon could hang behind the player's back for a few seconds after changing weapons.
Some pants had the equipped gun hanging outside the holster during the fitting on the Ragman service screen.
The observer did not see the player checking the fire mode on his weapon.

It was impossible to delete the overwritten preset.
Wrong mods were installed on the weapon if the build was initiated during a save process.

Failed to redeem all available items in the lot if the player attempted to purchase items over the limit.
Failed to interact with the inventory in a raid if the player had previously disassembled the weapon via the context menu.
When reactivating the exit with the hermetic door at the location Reserve, the siren stopped working earlier than it should have.
The sensitivity while aiming down sights changed when putting and removing sights from the weapon.
A character was performing a light grenade throw only by double-pressing the RMB.
Uninformative message about the lack of space in the stash when transferring items from the letter on "Receive all".
The “Found in raid” status for the weapon would not update if you would put non-found in raid weapon mod on the gun.
Incorrect information about the level of mastering in the weapon inspector.
The price of 1 item decreased by 1 ruble if a player bought several of the same items from a dealer.
The azimuth was missing if the player opened the pause menu with a compass in his hands.
The camera could go through the body of another player.
Missing messages in group chat.
Various server errors.
Various minor fixes.
Various localization fixes.
Various location fixes.
Click to expand...

new url for our discord!

There is a 25% ongoing sale right now
https://www.escapefromtarkov.com/preorder-page

If you wanted to play tarkov, now would be a good time to join us!!!!!

BSG having sale on EFT

If anyone interested, there's also a small, friendly and casual group of EFT players going through this season's levels.

Feel free to join: Casual Strokes Discord
You must log in or register to reply here.
Share:
Facebook Twitter Reddit Pinterest Tumblr WhatsApp Email Share Link
Important Forum Advisory Note
This forum is moderated by volunteer moderators who will react only to members' feedback on posts. Moderators are not employees or representatives of HWZ. Forum members and moderators are responsible for their own posts.