Overhead bridges are useful structures that allow us to cross busy roads without having to put ourselves in harm’s way.

A particular overhead bridge in the estate of Sengkang, however, has recently become the subject of much interest after a TikTok clip questioning its purpose vent viral.

Going by the footage, it seems the bridge extends only across a narrow section of the road leading to the nearby blocks.

However, residents could easily cross the road by doing so underneath the shelter. Hence, it’s slightly bewildering as to why there was a need for the overhead crossing – and the steps leading up to it – in the first place.


But this isn’t the typical neighbourhood tour video. Instead, the user took the opportunity to question the purpose of the bridge.

Here in Singapore, sheltered crossings serve many purposes, including shielding users from the sun and rain.

However, it seems slightly puzzling as to why there’s a need for steps connecting to the top of the crossing — which isn’t covered.

Furthermore, the road which it extends across comprises just 2 lanes – 1 in each direction – and doesn’t appear to be terribly busy too.

TikTok user gives a tour of the bridge​

To illustrate his point, the TikTok user gave viewers a virtual tour of the bridge.

One end of the bridge appears to lead to a garden pavilion across the housing blocks.

The other leads users down a long flight of stairs directly into the HDB estate.

It certainly serves its purpose of connecting one end of the road to the other, but at the same time, walking underneath the shelter without climbing the flights of stairs does seem a lot more chill.


Besides being a sheltered walkway for people on the ground, the bridge also doubles up as a drop-off point.

As for the upper portion, Mr Gan says it’s an observation deck that offers residents a vantage point from which to take picturesque images of the estate.

Covered walkways and overhead bridges are common structures in our country, where the sun could be shining down hard at one moment and rain could be pouring the next.

We’re glad that Mr Gan has since shared about the uses of the bridge. Who knew such an unassuming structure could serve so different purposes? 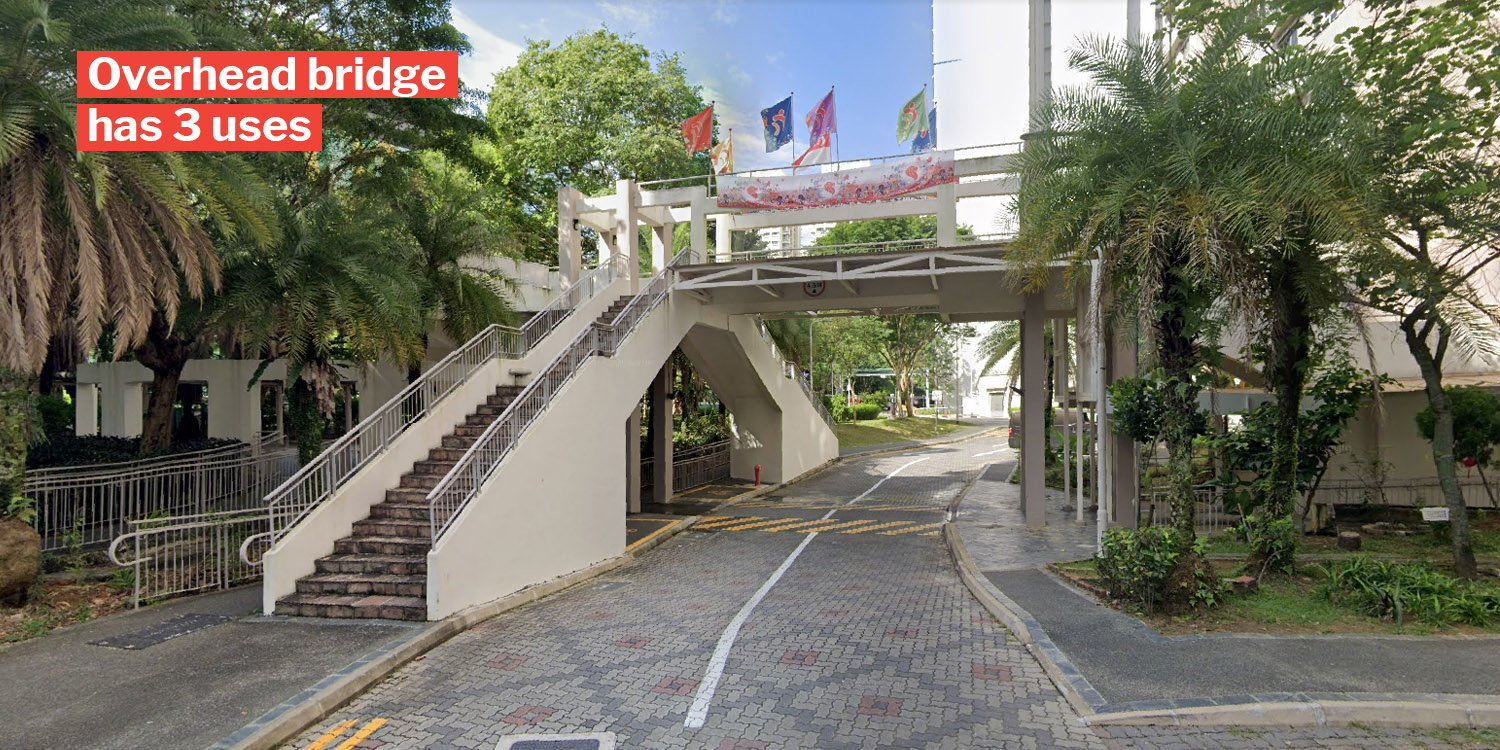 An overhead bridge in Fernvale has become the subject of much interest after a TikTok user shared a clip questioning its purpose.

Gan Thiam Poh is the same idiot who said everyone in Singapore pay $1 only so high pay for ministers are ok ?

Idiot. Seriously the way he answer he really think people are idiots ?

how to get that red clown emoji. Why my blue color

Nothing wrong what. That is obviously not build for the purpose of an overhead bridge right, the road is not even a main road. Although you still can use it as one if you like to climb stairs lah

snap99 said:
Gan Thiam Poh is the same idiot who said everyone in Singapore pay $1 only so high pay for ministers are ok ?

Idiot. Seriously the way he answer he really think people are idiots ?
Click to expand...

“To make it easier for the common populace to understand the required responsibilities and accountabilities of Ministers for Singaporeans, I have a suggestion that we can try to look at the issue from another perspective/angle as suggested by some Singaporeans for your reference.

“The PM is our leader and he must be responsible for the well being of 3.5 million Singaporeans, therefore his salary can be based on our population, say, one person $1 per year so that is $3.5 million per year. With that, perhaps all Singaporeans are able to feel the balance at a more comfortable level.

“The PM takes a pay cut of say 37%, so as to remind himself there is a need to work even harder to improve the livelihood of the 40% lower middle income Singaporeans. With that, the figure was adjusted downwards to $2.2 million, which is not much different from that recommended by the Committee.”
U

King.Koopa said:
how to get that red clown emoji. Why my blue color

to stimulate the economy, need build more useless things like this. guess who benefits most
2

What exactly is the observation deck suppose to observe exactly?
U

fortunecat said:
Nothing wrong what. That is obviously not build for the purpose of an overhead bridge right, the road is not even a main road. Although you still can use it as one if you like to climb stairs lah

is the reply kind of dumb

for ghosts to wave back when pap lorry went past the bridge after they won?
B

How much to build this bridge? I want to build 1 for my house so I can see the ants from the vantage point

Visor9999 said:
What exactly is the observation deck suppose to observe exactly?
Click to expand...

People who stay at level 2 should feel offended. Now they can be easily “observed”!

how many millions it cost?

icyflame said:
People who stay at level 2 should feel offended. Now they can be easily “observed”!
Click to expand...

Observe people staircation.
You must log in or register to reply here.
Share:
Facebook Twitter Reddit Pinterest Tumblr WhatsApp Email Share Link
Important Forum Advisory Note
This forum is moderated by volunteer moderators who will react only to members' feedback on posts. Moderators are not employees or representatives of HWZ. Forum members and moderators are responsible for their own posts.