Konnichiwa said:
Why wear shirt and tie?
Click to expand...

Konnichiwa said:
Why wear shirt and tie?
Click to expand...

maybe is those company-based Unicorn type, got dress code to adhere to?

Thanks for the concern.

Maybe u want to do a poll see how many ppl dislike me loh. Lol i am curious also.

Yah getting along well with my colleagues. Boss is good too. Probably really ideal place to retire working here.


Evangelionz said:
not angry but still harp so much like a grumpy little boy losing his toy.

anyway, why am i not surprise that whoever did whatever to you given the amount of people that dislike u? not to mention the ever annoying portion of you.

hope you are getting along well with your new colleagues.
Click to expand...

Just nice this morning was on this topic. But sorry, it's premium article. I xknt have account too, so don't know the full details...

While there have been calls to impose a minimum age limit for private-hire car drivers, younger drivers interviewed hope there will not be any such restrictions.

They say driving is a good source of income and can be a viable career.

Full-time limousine drivers like Mr Muhammad Izzuddin Abdul Latiff, 29, said if an age limit of 30 were imposed, he would be affected as such drivers also require a private-hire car driver's vocational licence.

Cabbies currently have to be at least 30 years old, but private-hire drivers just have to hold a driving licence for at least two years. They can get the licence from age 18.
Four MPs raised concerns about the low minimum age of private-hire drivers when Parliament debated the Point-to-Point Passenger Transport Industry Bill this month.

The legislation, which was passed, requires private-hire car companies, such as Grab and Gojek, to be licensed. But it did not address the issue of raising the minimum age of private-hire drivers.

For full-time private-hire driver Cedric Lim, who shares the sentiments of young drivers interviewed, the take-home pay is enough to make it a viable career.

An engineering graduate, he said he became an Uber driver in 2015 because of his "low starting pay" as an engineer.

Although the performance-based incentives that drew him initially to the sector have decreased, he can still make around $3,000 a month.

"If I want to earn more, I just drive more," he said, adding that he drives for both Grab and Gojek.

Lawyer Kenneth Chen, 29, who drove for Uber for more than a year in his undergraduate days, said it was more lucrative than other part-time jobs, like that of a waiter.

Suspect is a strategy by gov to solve unemployment issue. If restrict to 30 n above then those below 30 cannot find job GG sure vote pap out

Not forgetting, the more grab earns, the happier HC is

Trust me. Alot of lan jiao policy for phv all waiting in line to roll out after election

Now they can just drag first

Exam not easy leh. I need to retake. 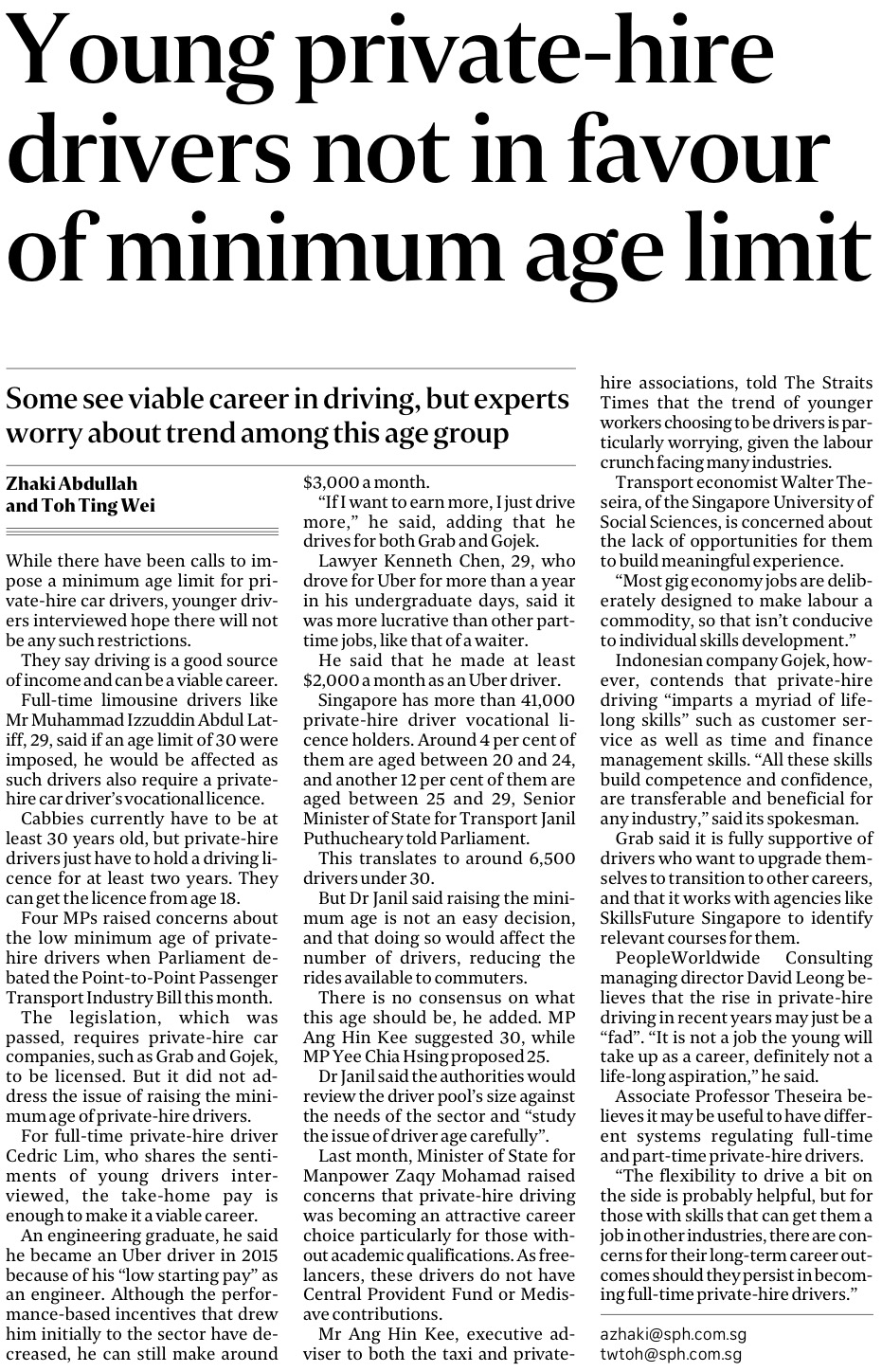 young driver like me see phv as a source of helping me to pay off my installment and use my salary to go for luxury holiday. i love grab.