i have a friend, local uni graduate major in maths.

fully paid hdb and got own car

couscous said:
i have a friend, local uni graduate major in maths.

fully paid hdb and got own car
Click to expand...

I used this phrase before.
If I throw a rock into a pack of dogs, the one that hollers is the one I hit.
Still, quite amazing to see how quickly some of us can get pumped up.

From 1 rotten egg.
He found a new bff.
Or is that a clone as well since he had no friends here?
When some of us are unable to accept hard truths told by others, we start to spin stories and create illusions like accusing others of clone accounts to divert the attention away.
Just because you say there's a clone, we're suppose to prove something to you?
Then next time you say someone fked your wife, are you going to ask all your friends to pull down their pants to inspect for your wife's abalone smell?

Someone mentioned to look at the big picture, someone else also mentioned about shallow-mindedness.
When the ones unable to zoom out afar are the horses themselves.

Sure, you wanna tell everyone where to go to find good fares.
That's entirely your choice.
What positivity comes from showing off fares?
Or is the positive only for your ego?

When we share bad nights, we hope to find fellow drivers who understand our plight, and just maybe, we might hear a story much worse, and don't feel so bad for ourselves.

When we share good experiences, some of us can laugh about it.
When we just share good fare and nothing else, what are we trying to prove?
That we're better than others?
That we're smarter at making money?
Or are we trying to gather other drivers to join us so they can have better nights as well?
Are you such a saint that you don't mind sacrificing longer working hours and burning more petrol because of slower pings, just so you can help uplift other drivers?

At the very least provide some reality and show the entire timeline of your work that night.
If you don't make 50-60 gross per hour for at least 3-5hours at the minimum, don't sit on your high horse here and make a fool out of yourselves and call it cp.

Other social media platforms may be doing it, so you feel you should be entitled to make your own toxic contributions as well.
There are fked-up men out there who gossip about their wives in public.
If your wife is wild in bed, do you want to share with me a sextape also?

Notice how good cp drivers will never reveal anything?
Because we're not dumb enough to invite competition to our playgrounds.
Maybe somedays the fares isn't affected, but the ping rate will slow down substantially, it's just logic.
Especially in today's market where there are still msw trips to be found - albeit lesser, just more drivers jostling for it after they hear how good it can be thanks to our loudspeakers.

It's cute how we believe prinsep to d'leedon at $22 is juicy.
Shows how little we know about cp yet still sound so confident.
Empty vessels make the loudest noise, anybody familiar?
Should I share how I did last night?
Why would I?
I certainly don't need an ego boost.
Besides, it still won't shut you up in future, so what's the point?

Of course, the newbies would look at them as idols.
Which is why they're doing it in the first place right?
Why else would anybody feel an insatiable need to tell the world what they're doing all the time?
Apparently this is their blog, loneliness perhaps?
Nobody liking your personal posts on your fb/insta, so you come here?
I always had the impression it was only girls who needed recurring affirmations.

Dennis?
Is he sure his name isn't Denise?
C

True.
Just that at the beginning it will be quite rough.
You havent build up your rep.
Your referrals havent come in.


couscous said:
i have a friend, local uni graduate major in maths.

fully paid hdb and got own car
Click to expand...

Cherry. Good long post but i hope u remove the wife part. Thank you.

If u have something unhappy with me, don’t drag my wife in.

Not happy. We can settle this out of forum.


I haven bring out your mother and grandmother k? 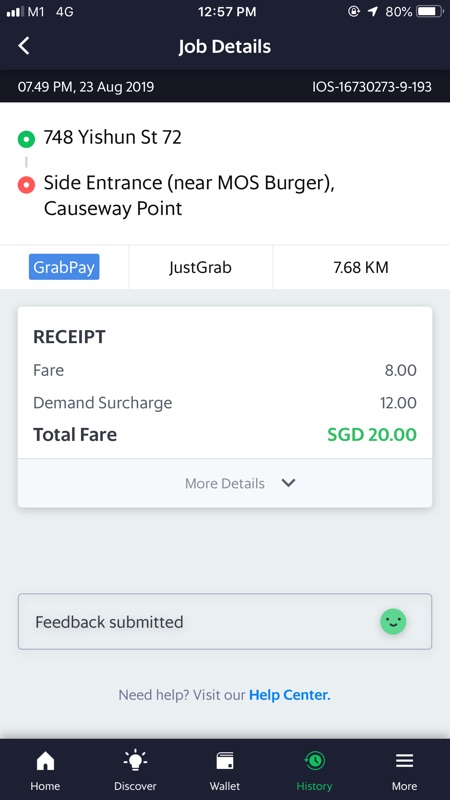 who say grab jpt? see my surge? haha i encourage all newbies to sign up! i am all the newbie idol. jy everyone! stay safe on the road! and btw whoever think i am a clone , we can meet out anytime to la kopi. i okay one. hehe.
M

ppl want to be idiot , i also can be a idiot. haha

but if aasng, ok la.

Be a men. Want to win arguement dun drag family members in.

I dun recall i got insult your mother and grandmother.

And you just admit you are a clone by getting so defensive. 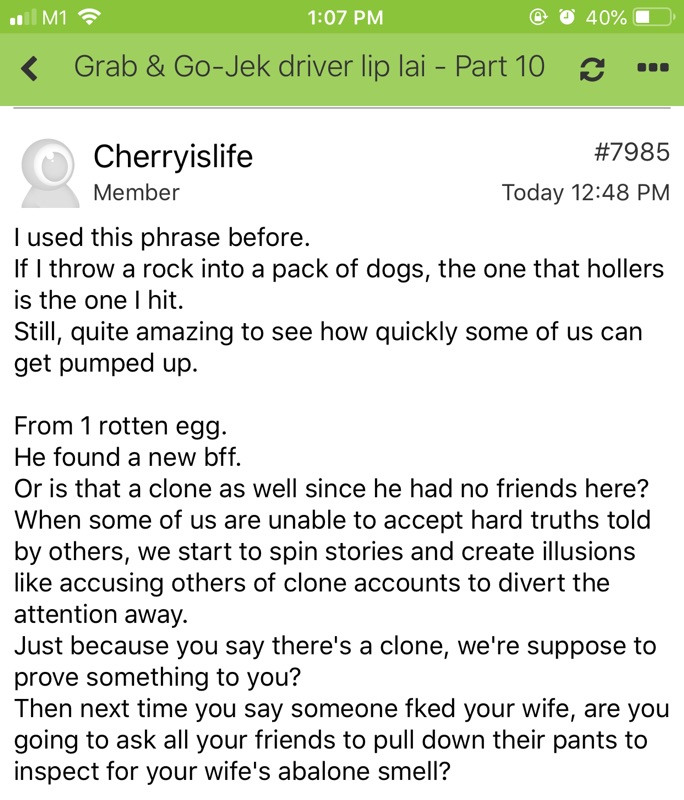 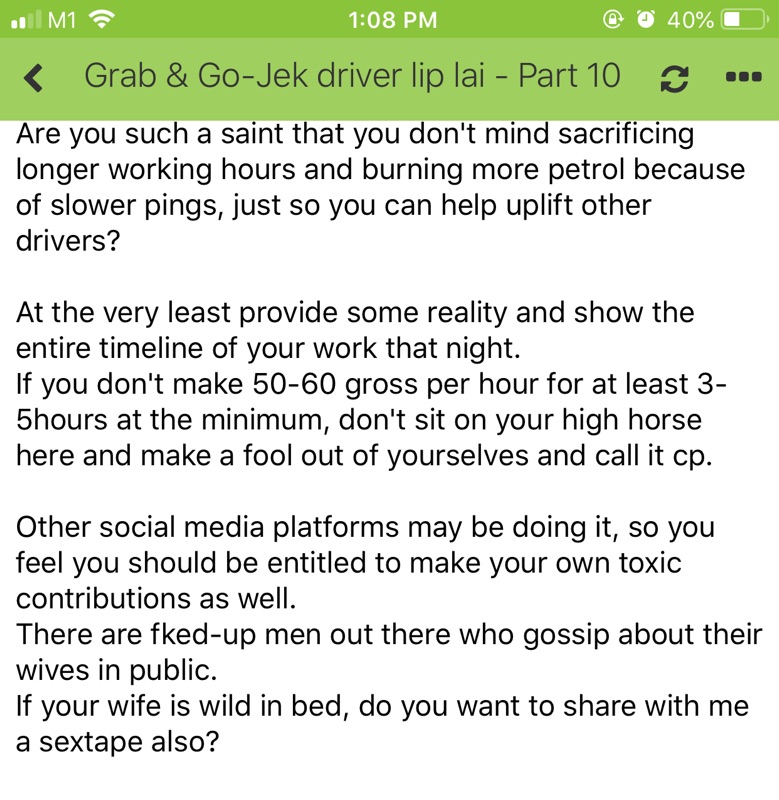 yeah i aasng. wont flame u la , since u always suan me i also get used to it alrd. no worries , we bro forever leh


couscous said:
i can only sae ur surge is lousy if compared to the professional cp

but if aasng, ok la.

Cp is not any high and mighty method.

The basis is just picking good surge fare and short distance and can quickly go back to surge fare for another. No rocket science. Even newbie can do it. Just need to be at the right place.

$22 from princep street to dleedon not good fare? Lol at this timing no car. Shoot down bukit timah then enter kings road. Just less then 20mins job chop chop. Along the way pick up another $15 trip then back to princep for another $37 fare. Soon soon li li. Not good meh?

No time to argue with low life clones who only know how to drag family members into picture.

Go wash my toilet then fumigate my car and kill all the xiao qiang. 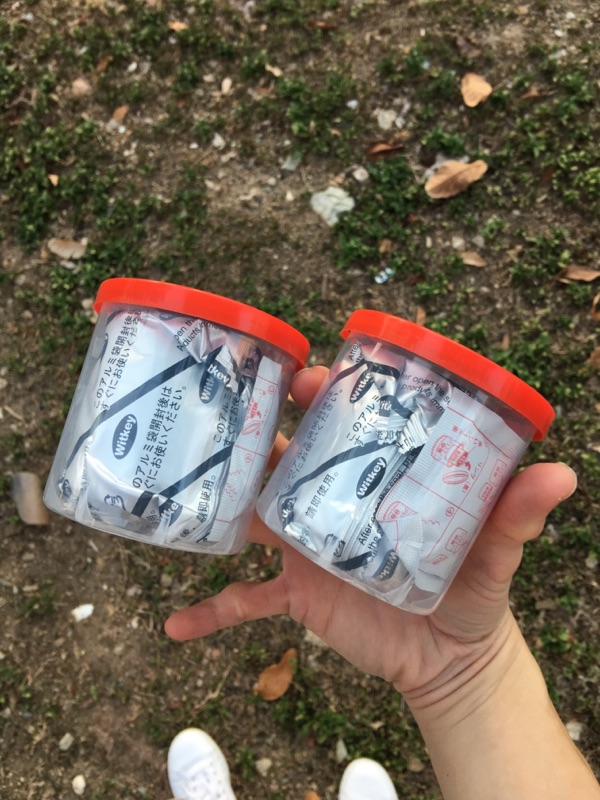 Waiting for cherry to post 1hr $200 fares. He is high and mighty CP emperor.

All hail the cherry emperor lol