[香港世纪大乱局] How many will protest on Sunday? [Live Stream][现场直播] - Part 9

satayxp said:
this is why the west needs to think carefully if they rly want china to become a western style democracy
such a china will feature politicians n political bodies who can easily tap into nationalistic sentiments n fervour to win votes resulting in the dysfunctionality seen in many western democracies n tw ~~
Click to expand...

China did tried western style democracy during KMT time what. But failed big time due to corruption lol.
S

12:30 PM · May 9, 2021
Rocket debris from both China and the US have fallen to Earth’s atmosphere, but US media outlets are making completely different descriptions.
Please take a look at how biased and shameless those media are. 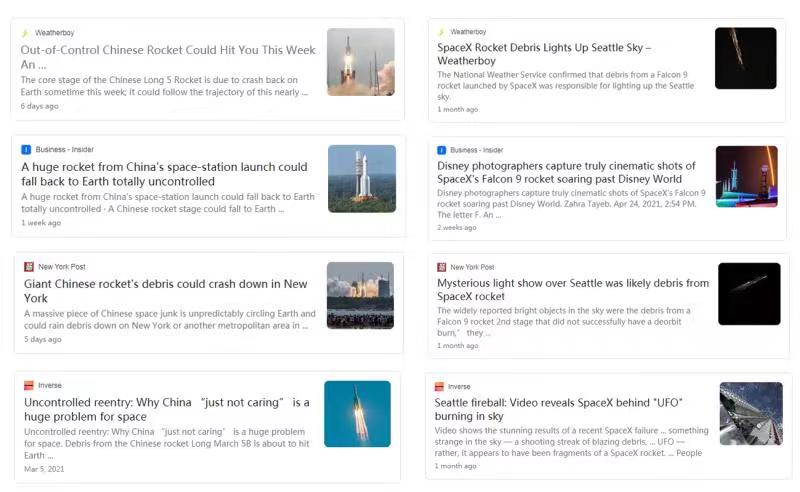 12:30 PM · May 9, 2021
Rocket debris from both China and the US have fallen to Earth’s atmosphere, but US media outlets are making completely different descriptions.
Please take a look at how biased and shameless those media are.


cannot be leh... i tot HK many supporters.... how come no one use Apple Daily to advertise???
lol... guess external funding kena blocked... haha...


cannot be leh... i tot HK many supporters.... how come no one use Apple Daily to advertise???
lol... guess external funding kena blocked... haha...
Click to expand...

yup. they talk until their so called yellow economic circle like very tuaki lol.
S

Adrian Zenz, a so-called scholar who has been clamoring about his imaginary "repression" of Uygur Muslims in Xinjiang, has remained silent on the bloody attack on Palestinian Muslims. After being asked to say something about it, he tweeted with a tone of whataboutism, saying, "I research western China's ethnic minorities."

In other words, Zenz was saying, Palestine was none of his business, but Xinjiang is. After all, he is paid by the anti-China far-right Washington-based organization, Victims of Communism Memorial Foundation.

"Human rights" is nothing but a tool for Zenz, who fabricated "forced labor" and "demographic genocide" lies in Xinjiang. He never really cared about human rights. Zenz and his like hold the one and only standard on judging human rights issues - whether they can help them attack the Communist Party of China, and thus advance US interests. To achieve the goal, Zenz can do anything, including counterfeiting data, making up lies, and raising fraudulent claims.

A simple reality can cut through his arguments - Xinjiang is among the regions in China which has the fastest population growth and youngest demographic structure, according to reports and analysts based on the latest national population census. It is happening when Zenz keeps stressing "forced sterilization" and "genocide" is taking place in the region.

Zenz has acquired some fame lately, yet not because of his academic level, but because he has the cheek to put out guesses as wild as he can without any proof and propagandize them in a serious manner. This is why Zenz is becoming a "well-known" and representative figure, Shen Yi, a professor at the School of International Relations and Public Affairs of Fudan University, told Global Times on Monday.

The so-called human rights in his research are fake, which has been proven by his lies in the past, and once again mirrored by his current silence on the Palestinian issue.

Zenz's trick is an epitome of US tactics. The US claims itself the lighthouse of human rights. But after Israel bombed the building in the Gaza Strip on Saturday which housed several media outlets including Associated Press, the latter did not even dare condemn Israeli strikes while only expressing "shock and horror." The White House did not condemn the attack either, not to mention it articulated two days ago of the US' "support for Israel's right to defend itself."

Ever since human rights became a diplomatic tool of US foreign policy, it has never protected the genuine human rights of Americans or worldwide citizens, but has turned into merely a label. When Washington needs it to attack, various excuses can be choreographed under the name of human rights. But when a US ally violates human rights, Uncle Sam would only turn a blind eye to it, Shen said.

The US has no human rights at all. Evidence is abundant. Take a look at the number of COVID-19 deaths in the country, racism, or the issue of gun violence. But when the US needs the tool to serve its national interests, it can make up noble human rights excuses at once.

Chinese people are living an increasingly better life. China has discovered creative and efficient methods to fight coronavirus and terrorism. Yet that goes against US interests. In Washington's playbook, Beijing is a rival, even an enemy, so it must have human rights issues, regardless of the facts. But Israel is different - how could a US ally have human rights issue? That's why the US seems okay with Israel bombing the media building or hurting Palestinian civilians, according to Shen. US media outlets even tried to help explain how civilized this US ally was - personnel in the building were told an hour in advance to leave the building before it was bombarded.

This is how US human rights work.

lol.... i also just come across this topic

Lol rly is biggest bullsh1t story of 2020
is a big lie all along helped by fake media like apple daily... proven these "pro democracy" hongkies r truly daft n evil

BioProEng said:
lol.... i also just come across this topic

waiting for Enig and Ruoqin and other pro rioters to come in SSRR leh haha. That time they were parroting yellow media's fake news to condemn HKPF when so many people already debunked it with facts that the girl was not shot by police but by her own rioters shooting slingshots using metal ball lol.

The girl's position was behind the bus stop which blocked her from police view. Totally not possible to shoot her in that position haha.

but be careful they will label you a wumao or CCP bootlickers hor
Click to expand...

lol... used to it..... doesn;t impact me much/anymore liao..... had grown the immunity from this hk riot thread. lol
S

Hu Xijin 胡锡进
Editor-in-chief of the Global Times | 环球时报总编辑
16h
Such condemnation is nothing and China will ignore it. In China-US arm wrestling over Hong Kong, the US has lost.

starship888 said:
Hu Xijin 胡锡进
Editor-in-chief of the Global Times | 环球时报总编辑
16h
Such condemnation is nothing and China will ignore it. In China-US arm wrestling over Hong Kong, the US has lost.

USA no more new tricks? Go back covid leak from wuhan, see nobody cares, now go back hk..... And if nobody cares, go back xinjiang, Tibet and tw?

Tw so obident to them, now covid outbreak there, ask them for vaccine, say tw number still small, they can handle, so not impt for vaccine..... Then forgot where donate moderna vaccine to them, tw ait make it as if usa send them the vaccine....

but be careful they will label you a wumao or CCP bootlickers hor
Click to expand...

Its ok can label them back as CIA agents
S

https://help.twitter.com/rules-and-policies/state-affiliated-china
Is this inciting a color revolution in Hong Kong from the outside? Isn't it reasonable for the Chinese central govt to resist such infiltration via national security law for Hong Kong? If Chinese institutions engage in such activities in the US or the UK, will the West allow it?

Reports that Denmark’s military intelligence agency helped the US to spy on leading European politicians, including the German chancellor, Angela Merkel, have sparked concern – and demands for an explanation – in EU capitals.

The allegations are contained in an internal classified report on the FE’s role in the surveillance partnership agreement with the NSA from 2012 to 2014, the broadcaster said, citing nine unidentified sources familiar with the investigation.

It said the NSA used Danish information cables to spy on senior officials including the former German foreign minister, Frank-Walter Steinmeier, and the then opposition leader Peer Steinbrück.

The Danish broadcaster said the NSA retrieved text messages, calls and internet traffic including searches and chats thanks to its partnership with FE. Denmark, a close US ally, hosts several key landing stations for undersea internet cables to and from Sweden, Norway, Germany, the Netherlands and Britain.

Snowden on Sunday accused Joe Biden, who was US vice-president at the time, of being “deeply involved … the first time around”. Snowden called on Twitter for “full public disclosure not only from Denmark, but their senior partner as well”. 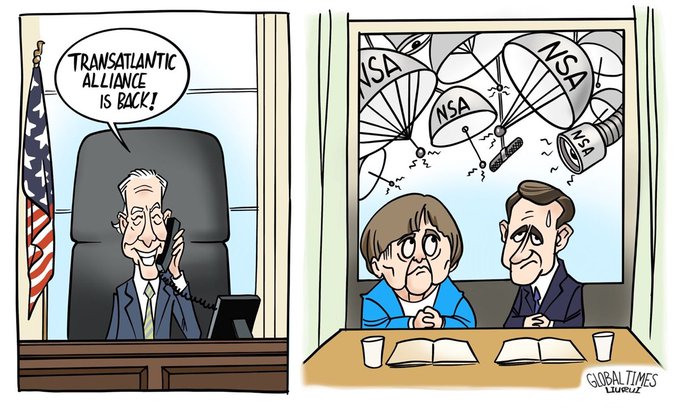