if Trump shu shu still president, do you think afghan will still fall to taliban?

Trump is a businessman not a battle strategy warrior. 他懂得做生意赚钱，不代表他擅长兵法。
I

They already agreed to handover Afghanistan, but maybe with trump they might show him face by letting them pull out first before overrunning Afghanistan.

But the fall of Afghanistan to Taliban is inevitable after the US leave.

You are aware he was the one who pushed for withdrawal and kickstarted the process right?

Biden still had the chance to review though.

Jason.OnEarth said:
20 years of efforts went down the drain, started from Bush in 2001 till Biden 2021

pieface said:
They already agreed to handover Afghanistan, but maybe with trump they might show him face by letting them pull out first before overrunning Afghanistan.

But the fall of Afghanistan to Taliban is inevitable after the US leave.
Click to expand...

Fall even faster. You don't remember he was the president who shouted bring them home ah?

The withdrawal was initiated by Trump
H 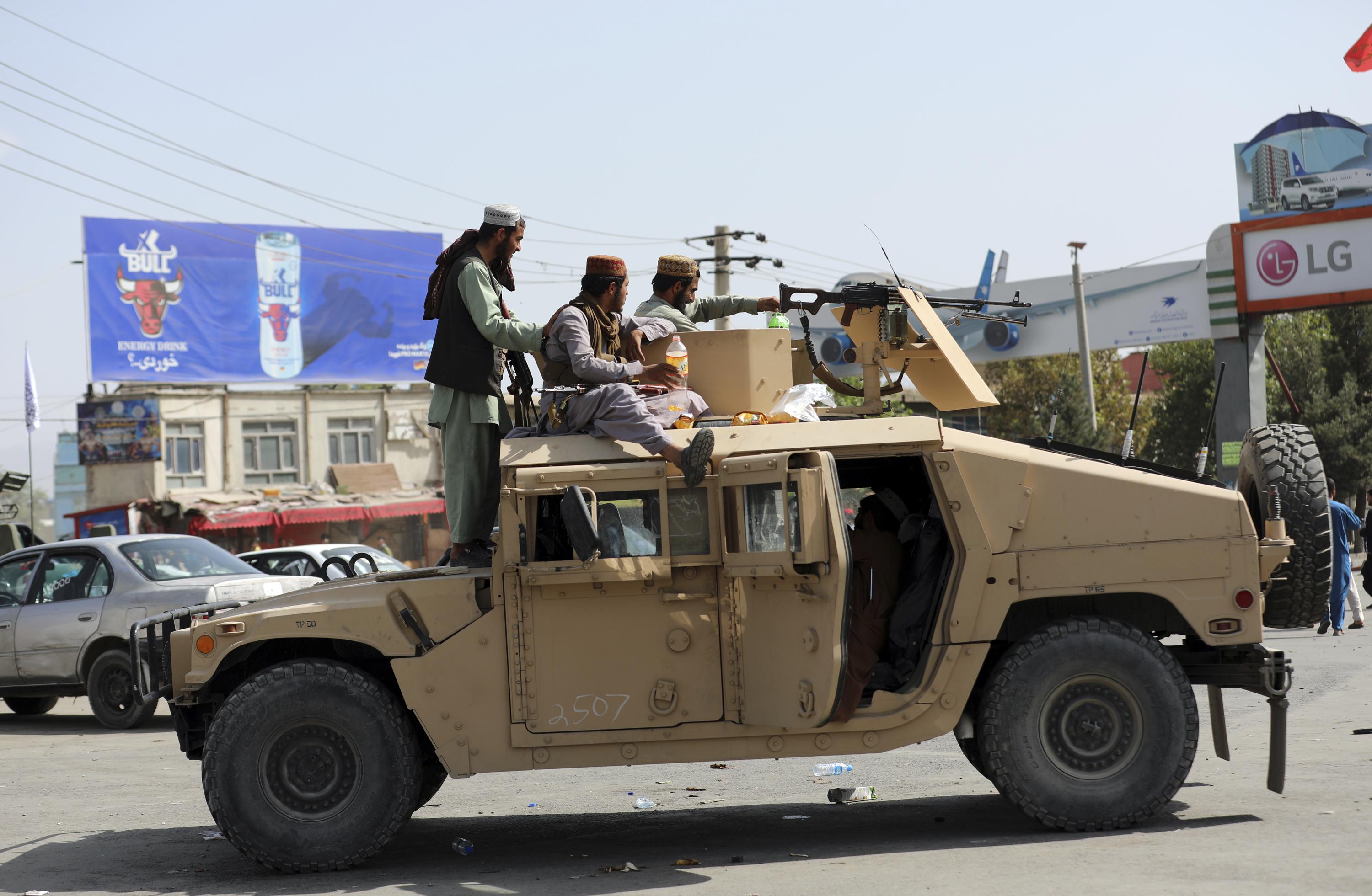 WASHINGTON (AP) — Built and trained at a two-decade cost of $83 billion, Afghan security forces collapsed so quickly and completely — in some cases without a shot fired — that the ultimate beneficiary of the American investment turned out to be the Taliban.

- Taliban grabbed not only political power but also U.S.-supplied firepower — guns, ammunition, helicopters and more.
- The Taliban captured an array of modern military equipment when they overran Afghan forces who failed to defend district centers.
- Bigger gains followed, including combat aircraft, when the Taliban rolled up provincial capitals and military bases with stunning speed, topped by capturing the biggest prize, Kabul, over the weekend.
- The reversal is an embarrassing consequence of misjudging the viability of Afghan government forces — by the U.S. military as well as intelligence agencies — which in some cases chose to surrender their vehicles and weapons rather than fight. 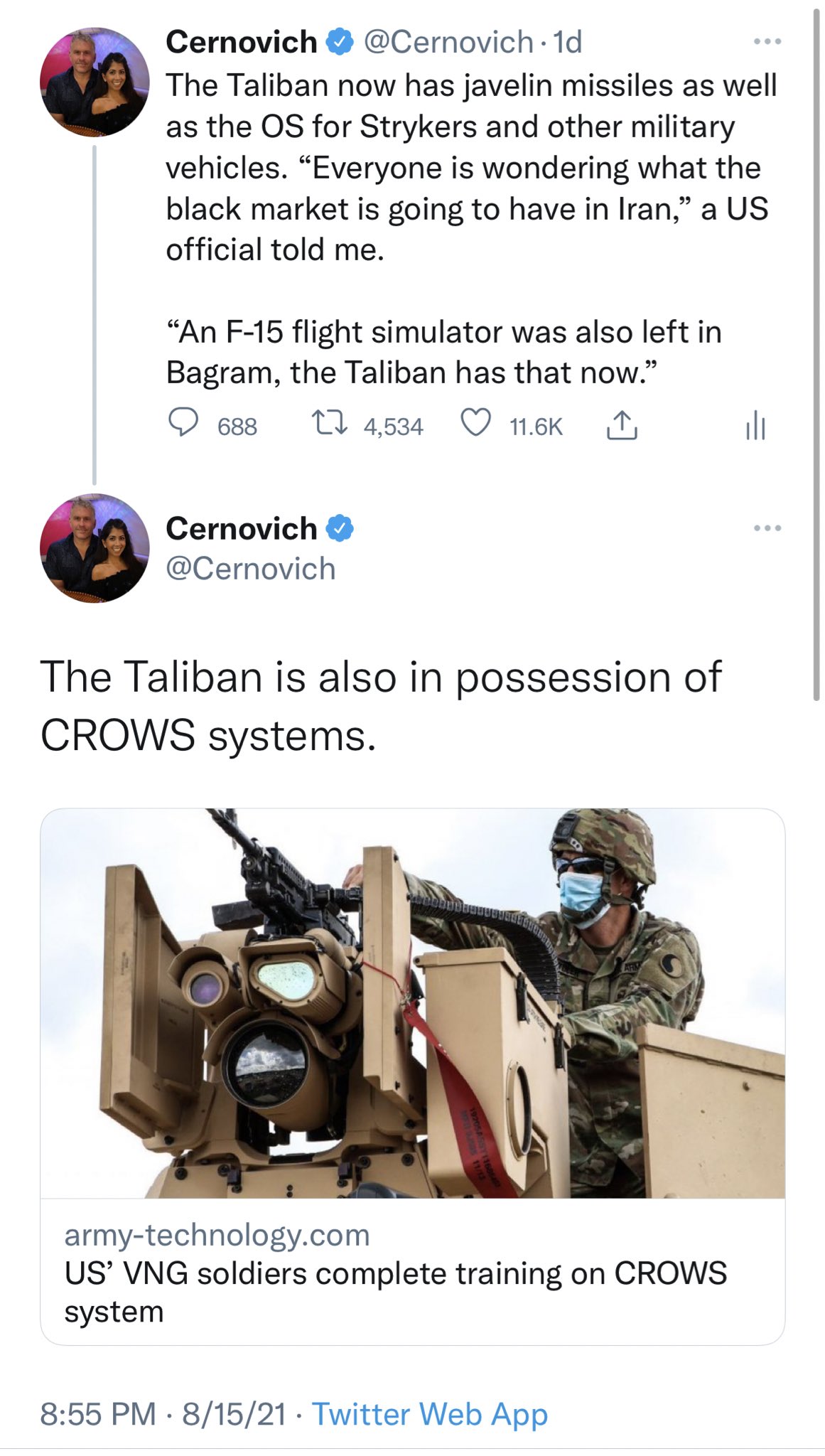 What talking u? Trump was the one who negotiated with the Taliban and agreed on a deal to withdraw the US troops.

Didn't he withdraw when he was in office...?

Trump threatened to go back and wack the taliban if they invaded Afghanistan. And trump is arrogant enough to believe he could do it. That full of himself arrogance would have made the taliban apprehensive.

With the current biden administration and woke USA military, the taliban has zero fears of that happening, which resulted to the utter collapse of Afghanistan.

Its a game of poker. Trump appears to have a full house, Feeble Joe openly shows his cards before the taliban even called his hand.

He will bring US to afgh
H

Kiwi8 said:
What talking u? Trump was the one who negotiated with the Taliban and agreed on a deal to withdraw the US troops.
Click to expand...

The decision to withdraw is correct. But, the manner to withdraw is totally screw up. There is no coordination, no planning, totally chaotic and disorganised.

Compared to the way Trump organised the withdrawal from Syria, very organsied and systematic... he even managed to use the withdrawal to lure out Baghdadi and then have him killed.

It is like preventing the spread of covid. Everyone know that we must control the spread by tightening border, clean up the foreign dormitories, monitor the KTV and fisheries.... but some govt are too fxxk up compared to others.
H

Trump would have again dropped MOAB on the Talibans if they don't honour their agreement... That's why Talibans fear him and would not dare to renege, as they would against Comical Joe.

Icecreampop said:
Trump is a businessman not a battle strategy warrior. 他懂得做生意赚钱，不代表他擅长兵法。
Click to expand...

Biden only know how to touch young girls

He would not only withdraw he will collaborate with them
You must log in or register to reply here.
Share:
Facebook Twitter Reddit Pinterest Tumblr WhatsApp Email Share Link
Important Forum Advisory Note
This forum is moderated by volunteer moderators who will react only to members' feedback on posts. Moderators are not employees or representatives of HWZ. Forum members and moderators are responsible for their own posts.