TOKARA said:
I watched the game until Sonny was redded.

Spurs did ok, never their intention to park bus. They went in with confidence sure win and tio busted. Chelsea went in to play with heart, Spurs went in same with anger and gets nothing but color ful cards.
Click to expand...

Actually Spurs played well in the first half. Two great chances one for Kane and one for Heung Min. William goal is really nothing to say. Chelsea penalty call is really the cause of the stupid keeper doing kungfu kick? Wat was he thinking?

Too bad it is football, anyting can happen

The United boss is aiming for a positive response after today's result.
Click to expand...

All of us can be ole Le, predictable not like mou.

ragnarok95 said:
Cannot, ED need to save his face. He is NOT a sacking CEO.

He won’t be sacked ya. Yes man, won’t ask for money, no ambition, just say yes and use whoever he has.

Si boh si boh ? Last time alreay tell you all liao, smalling is like a thin and solid pillar, hiding and supporting consistently at the corner, all here mai believe, say he not power enough, ya lah ya lah, pogba and alexis then power lah, now he not here then regret and know must tresure, hrmp
Orbigoot to the decision maker

runforyourlife said:
He won’t be sacked ya. Yes man, won’t ask for money, no ambition, just say yes and use whoever he has.
Click to expand...

when he is about to be sacked, his players will start playing for him for few games as he is also a yes man to the players especially lingard.

why would Ed sack a manager that did what Ole did 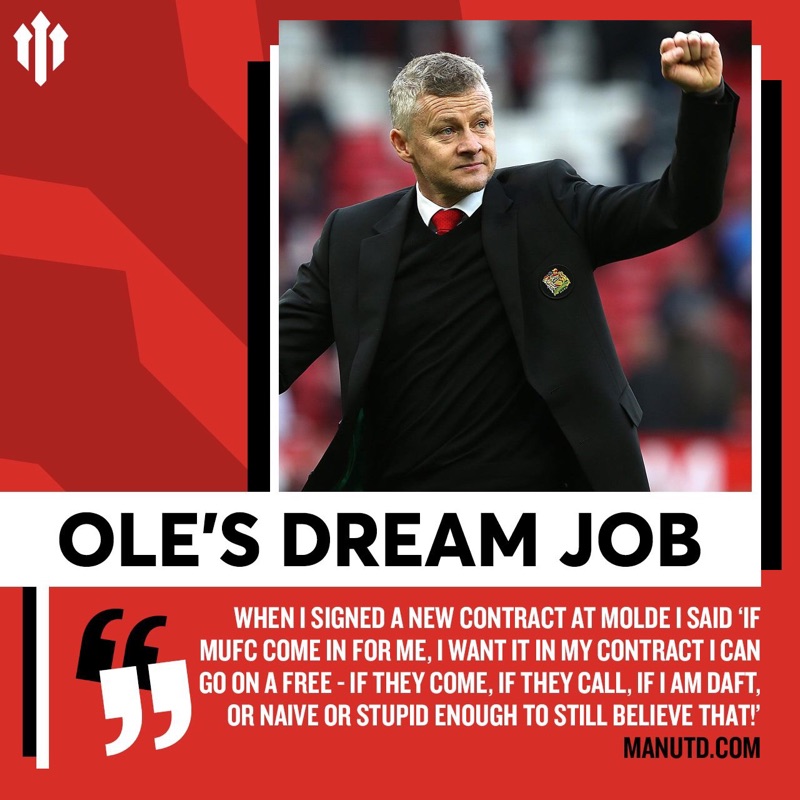 Asakura said:
i for one thinks Poch cant do any better with this team then Jose, that is poorer den his Spurs before he left them.
Click to expand...

Poch is better than mou. Ole cannot survive in preimer league. Give ole everton or watford, no way ole will win.

Manu is winning in big games when the players feel like winning.

could be only doing well because its Italian league

lockks said:
Poch is better than mou.
Click to expand...

johnny evans is another one doing well after we sold him

phil jones should be the one leaving

TOKARA said:
johnny evans is another one doing well after we sold him

phil jones should be the one leaving
Click to expand...

which club want to buy/loan a player that spend most of his time in the sick bay. some more he always put himself in danger of injury with those tackles.

lockks said:
Poch is better than mou. Ole cannot survive in preimer league. Give ole everton or watford, no way ole will win.

Manu is winning in big games when the players feel like winning.

Buy him to fulfill English quota.

Single is not a status. It's a word that describes a person who is strong enough to enjoy life alone. HardwareZone Forums app
T

Can sell him to China or like terminate his contract? Waste of space.


TOKARA said:
johnny evans is another one doing well after we sold him

phil jones should be the one leaving
Click to expand...

2 rare mistakes from 2 of our most consistent and outstanding players. For the first goal, I'm just appalled at how much space he got on that left side. No prizes for guessing which department I'm most critical of. The perfect example of thinking the cow in the other field is better.

Other than that, we were poor. Lacklustre. Clueless. Careless. Overconfident. For whatever reason, we couldn't get a rhythm going. ScottM wasn't firing on all cylinders, neither was MarcusR nor AnthonyM. In fact, no one was. Defenders making wayward passes. Midfielders not really connecting. Forwards thinking they can dribble past 5 defenders every time. Even DanielJ seemed to be slower or something.

PaulP comes on, lobs a few balls over the top for the forward to chase, and those are called quality balls? I struggle to understand.

I also find it hard to believe that a team's mentality/preparation can come undone by an hour's delay due to traffic. What were they doing on the bus, playing poker? In fact, I think the team was set up wrongly when everything just doesn't work. It's highly impossible. Most likely overconfidence and underestimation of the table proppers.

Nevertheless, the team will have a chance to redeem themselves in 3 days. And then again in another 5. This period used to be very enjoyable, but now it's a big unknown how it is all going to turn out.
F

ticcan said:
Lingard is the waste of space he is constantly playing **** but still get picked
Click to expand...

Yes Lingard is crap. But Ole still starts him though.

Who cannot tahan the fall anymore and going to sell out your man u jersey to be a liverpool fans or spurs fans le? Because you already cannot derive any pleasure for now from looking at your man u jersey?
Not me.

u put what manager also no use...it's the top is the problem....they want play youth can...but first have strong back bones.....now whole team like sand