one draw game and the back 4 are being criticised upside down.

i am pissed off too but what happened to the midfield?
Southampton was coming at will from the start ; they paused after MU went into the lead but resume domination in the second half.

MU chose to back pedaling instead of dealing with it in the middle of the field.

Ole will have to decide how to balance the squad for all these games.. 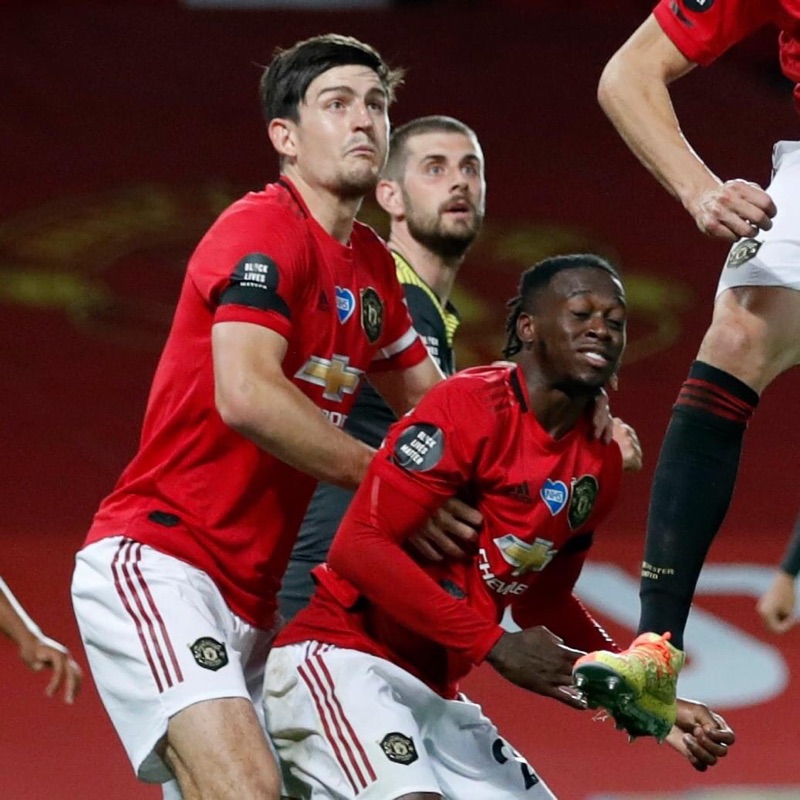 This Maguire is turning out to be a scam slowly

I only really have a problem with back 2. I think AaronWB and LukeS are doing alright and generally consistent.

thenakedshades said:
Anyone notice now the Utd social media hardly got the likes of Jones, Lingardinesta and Tiki Taka legend? Or rather, not on first image.

In recent comments by OGS, he mentioned while there is no blame culture in Utd, he will observe players making mistakes or those not playing well, give them enough chances and if despite these, they will be taken out and chances given to other new emerging ones.

Maybe that’s how Greenwood was given a chance. He was sick of Lingard and AP15.
T

Is dalot fit? Or out injured?

YorYor said:
And straweffigy needs to be burned! After reading your post, I had that niggly feeling of agreement...
Click to expand...

Lol I said that and I went to sleep. As the saying goes: Luckily didn’t stay up to watch

spykid said:
Don’t need to panic just yet. As i said, fourth or third doesn’t matter as long as we get one spot. We have to beat Palace next, if we don’t then we really have to beat Leicester on the final day or at least not lose there. Chelsea will beat Norwich and Wolves. In fact they will most likely finish third. It’s between United and Leicester for that final spot. I back us to do it. If we don’t, we don’t deserve anything at all when it’s in our hands
Click to expand...

thenakedshades said:
We still need to play West Ham and they are fighting to avoid relegation

We should beat West Ham. They are manage by David Moyes and they don’t high press teams like Soton do

I more concerned on Palace. Zaha or Townsend either one are bound to score

VAR was off form today.

spykid said:
Our team just go to pieces when the pressure cooker is up. Maguire is also one peculiar guy. Everytime he gets the ball, he will pretend to survey the pitch like he’s Pirlo when his intention all along is to play it short to Shaw on his left and by then every opposing player has already regroup into their positions. You could see this coming a mile off. Next time just watch him. He does this every single time for 30 times every game. It’s the most annoying to see
Click to expand...

You are going to make me waste my 90mins next game... I'm going to be so fixated on him I'll miss out watching the overall team play.


VAR was off form today.

var not designed to be on form

spykid said:
First time i watched Soton this year and they were really good. They pressed every United player into mistakes and they did it for ninety five minutes. I have no idea who their manager is but it’s obvious they are a well coached team. Abit like Sheffield United

Our team just go to pieces when the pressure cooker is up. Maguire is also one peculiar guy. Everytime he gets the ball, he will pretend to survey the pitch like he’s Pirlo when his intention all along is to play it short to Shaw on his left and by then every opposing player has already regroup into their positions. You could see this coming a mile off. Next time just watch him. He does this every single time for 30 times every game. It’s the most annoying to see
Click to expand...

then shaw pass back to him, he pass to lindelof, lindelof to awb and they try to 1-2 with greenwood to get to an attacking player

And I still don't like PaulP playing just in front of the defence. He seems to be unlucky in which everytime he loses the ball, it leads to some very tricky situations for us. I wonder if there are any stats for this - number of times PaulP loses the ball in our third leading to a goal conceded.

thenakedshades said:
Is dalot fit? Or out injured?

we still got fosu-mensah.

Anyone knows what are the remaining games left for Chelsea,Leicester and United?
T

spykid said:
We should beat West Ham. They are manage by David Moyes and they don’t high press teams like Soton do

I more concerned on Palace. Zaha or Townsend either one are bound to score

Palace, west ham and Leicester we should beat all 3 of them, of course it won’t be easy but we have no other choice if we want to get back into champions league, I don’t want us to rely on the lottery of the Europa league.
J

Scholes hits out at one Man Utd player for getting ‘bullied’

They were on course for a fifth successive Premier League victory, having bounced back from Stuart Armstrong’s early opener through Marcus Rashford and Anthony Martial goals in quick succession.

But, just as the jump to third in the league beckoned for Ole Gunnar Solskjaer’s men, substitute Obafemi struck in stoppage time to seal a 2-2 draw the Norwegian could have few arguments with.

Obafemi reacted quickest to a flick on by Jan Bednarek to slot the ball in at the back post and Scholes reckons Lindelof should’ve done better defensively.

“Lindelof I think has to be a stronger there,” Scholes told Premier League Productions.

“He has to be goal side. He allows himself to get a little bit bullied by the centre forward as he manages gets a foot in. I don’t think Lindelof really reads the danger there as he should do as a centre half.”

Reacting to the draw, Man Utd boss Solskjaer said: “Well, we have been on a great run. It’s not going to be like turning up and being given three points.

“They’re going be tough games, the next three as well.

“We didn’t expect anything else than what we got here today from Southampton.

“It was a good game of football that unfortunately ended in a conceded goal at the end for us.

“I have to say the mentality of the boys has been brilliant. We’ve had a few setbacks over the season, of course, and this is another challenge for us.

“I am very confident in the mentality of them. Very disappointed, of course, but we have to take the disappointments as well as the positives when you win games.

“Conceding with one of the last kicks and lose two points, that’s just part of football.

“We’ve learned a hard lesson today hopefully, so we’ll make it right, we’ll put it right. I trust the boys in that respect.”

Now 4 points behind Chelsea, we absolutely must beat palace.

Let's see if the team really do turn up.. AT ALL