jannworld said:
Android user? One of my Friend used to have this problem but he was using old Samsung s6 or something - his char will auto run around after 5mins or so of game play

But after he switch to iphone didn’t encounter this so I not sure is it an android issue. Myself iOS /m1 also dun have this problem.

My Wife on iOS but singtel sometimes have a problem where she logon the game, it shows her in old location. Eg she play in location A and shutdown game. Went to location b and login pogo but sometimes ingame, her char is at location A still
Click to expand...

yup android! after 10 mins then back to normal.

Mi Max is a big phone. Play PoGo must be very shiok.
M

tt32003 said:
Right now i'm only opening 7km egg sent by my friend from US for distance

The rest like from Malaysia etc won't even bother liao

They should change content of 7km egg soon. Getting boring

Still got Raichu and Morawak

Hello, is there any different with the 7km egg that you got from US? thanks.
S

Went to google the sculpture at the gym in TWN is Arthas Menethil from Hearthstone: Heroes of Warcraft.

MinMin85 said:
Hello, is there any different with the 7km egg that you got from US? thanks.
Click to expand...

no difference. you could probably get a US-born rattata if you are lucky?

tt32003 said:
Right now i'm only opening 7km egg sent by my friend from US for distance

The rest like from Malaysia etc won't even bother liao

They should change content of 7km egg soon. Getting boring

Still got Raichu and Morawak

they should just shift all egg to only obtainable thru gift.
pokestop no longer give egg.

Congrats, my 2 more acc got unlocked, now left 1 not yet unlocked.

But heard lag quite badly

MinMin85 said:
Hello, is there any different with the 7km egg that you got from US? thanks.
Click to expand...

does anyone know how the traded pokemon distance is calculated?
T

so far. highest i traded was 16.9k. hvnt seen anything further. at least on my sceen. (think it was aust to usa)
T

now. to get gentleman. i need another 900 trade. hahaha.
L

so far. highest i traded was 16.9k. hvnt seen anything further. at least on my sceen. (think it was aust to usa)
Click to expand...

now. to get gentleman. i need another 900 trade. hahaha.
Click to expand...

i plan to mass trade piddgy to my wife, wahahhahaah

The social aspects of Pokemon Go, where friends can go out to catch Pokemon and do battle together, as well as regular content updates keep the mobile game popular two years on

Two years on, Pokemon Go is still pulling in the crowds and hovering near the top of mobile game download charts.

The latest evidence of the popularity of this augmented-reality (AR) game: A special game event last month saw at least 100 people playing the game at VivoCity, as seen from videos posted by a local Pokemon Go interest group on Facebook.

Globally, the game has raked in US$1.8 billion (S$2.5 billion) in player spending - around US$2 million a day - since its launch, with US$1 billion from the first seven months, according to mobile analytics firm Sensor Tower.

In Singapore, Pokemon Go players - or trainers, in the game's parlance - have spent more than US$10 million since the launch of the game, according to Sensor Tower. To compare, gamers in Taiwan, which has a population around six times that of Singapore and is the fifth biggest spender in Pokemon Go, spent US$48 million.

For many regular players here, the game's staying power has to do with its social aspect.

Madam Wan Huiming, 60, a retiree, started playing the game because her son and daughter-in-law were playing it. She felt it helps them bond when "we go to parks to catch Pokemon together".

"I think the Pokemon look very cute and catching them makes me happy," said Madam Wan, whose favourite Pokemon is the tortoise-like Squirtle.

"It is a good form of exercise and bonding," said content strategist Lim Tze Mynn, 32, who was introduced to the game by her sister. She is out most weekends these days with her siblings and siblings-in-law playing the game.

Ms Lim's brother-in-law, creative director Seah Zhau Ping, 30, added: "It certainly is a great way to inspire myself to walk more with a goal in mind, like spinning more PokeStops." (See story below)

Mr Lim Wei Kwang, 34, who works in the financial industry, said he spent money on Pokemon Go mostly because of his bets with friends.

"If one of us achieved a certain milestone, like hatching the most eggs, the other parties will chip in to buy PokeCoins for the winner," he said.

Another key reason that Pokemon Go is still going strong is that developer Niantic has been continuously updating the game. "Niantic has done a great job... with regular content updates, along with limited-time events that motivate players to keep coming back for more," said Sensor Tower co-founder Oliver Yeh.

Since the game's launch, Niantic has introduced new generations of Pokemon, as well as Raid Battles, where trainers can fight and catch strong Pokemon.

It is through Raid Battles that rare Pokemon can be caught. And just last month, three new features that further bolstered the social aspect of the game - Trading (trade Pokemon), Gifting (give in-game items like potions and eggs to friends) and Friends (increasing friendship levels yields rewards like attack bonus) - were introduced.

Niantic has also created special events that offer goodies and perks, such as those that give players a better chance of catching the rare "Shiny" variant of a certain Pokemon in a specified time. There are also challenges that yield the reward of catching a rare Pokemon.

Pokemon Go: The basics
Pokemon Go was launched in the United States, Australia and New Zealand on July 6, 2016 before arriving in Singapore a month later. It quickly became a cultural phenomenon, gathering plenty of media attention and players.

The game makes use of AR and GPS to let players catch virtual monsters based on the popular 20-year-old Nintendo franchise, as players move around in the real world.

Trainers catch Pokemon using Poke Balls, which they can get for free at various PokeStops. Trainers can battle other trainers at Gyms. These PokeStops and Gyms are based around landmarks or points of interest that players can submit to the game's developer Niantic.

While the game is free, trainers can use real money to buy the in-game currency, PokeCoins, which are in turn used to purchase in-game items such as Premium Raid Pass, Lure Modules or more Poke Balls.

In its first 80 days, the game was installed more than 550 million times and generated over US$470 million in revenue, according to gaming market research firm NewZoo.

He cited nostalgia as a big factor. "People who loved Pokemon as kids were drawn to Pokemon Go. After that, the user base snowballed from the initial media attention given to the game and many more people picked it up," he said.

jq75 said:
Got this from a frd
He told me there's a bug which allows him hatch all eggs at one go. Not sure if it's PS 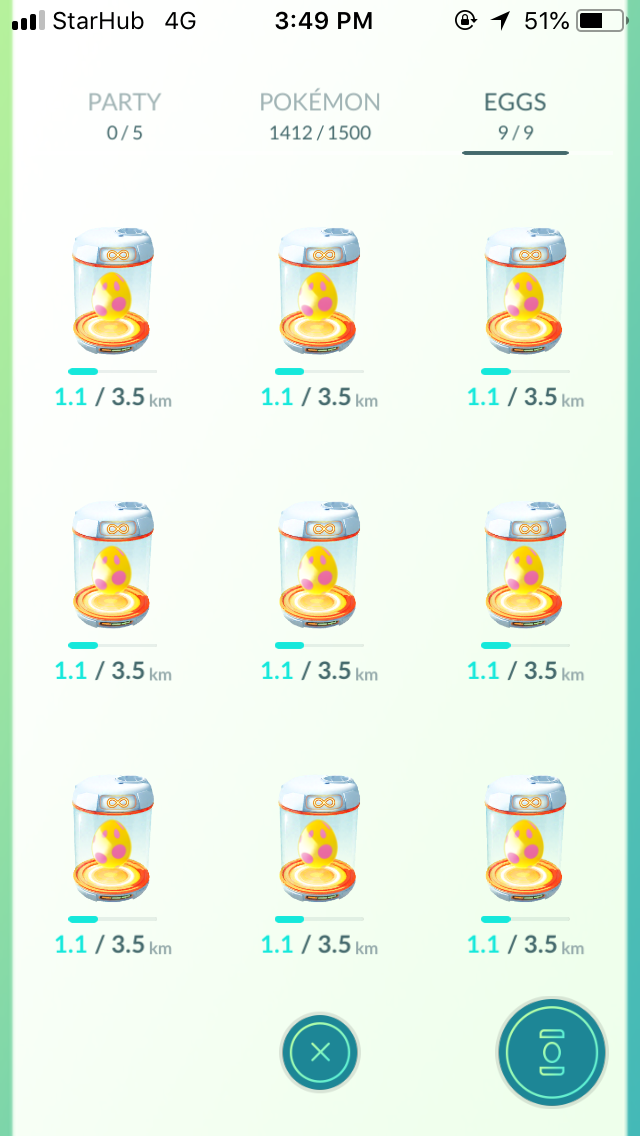 Posted by myself HardwareZone Forums app
Click to expand...

Just like your opinion, which pokemon would you put as buddy with you.

This depends on what u need most.

Personally I dun lack larvitar or dratini candies due to the recent CD events.
I am also done with blissey, metagross or salamence candies so instead I put mewtwo as my buddy because my next personal project is to max out my best mewtwo. I know 20km is a lot but since I dun need others now so I buddy a legendary


Jeremy1 said:
Just like your opinion, which pokemon would you put as buddy with you.