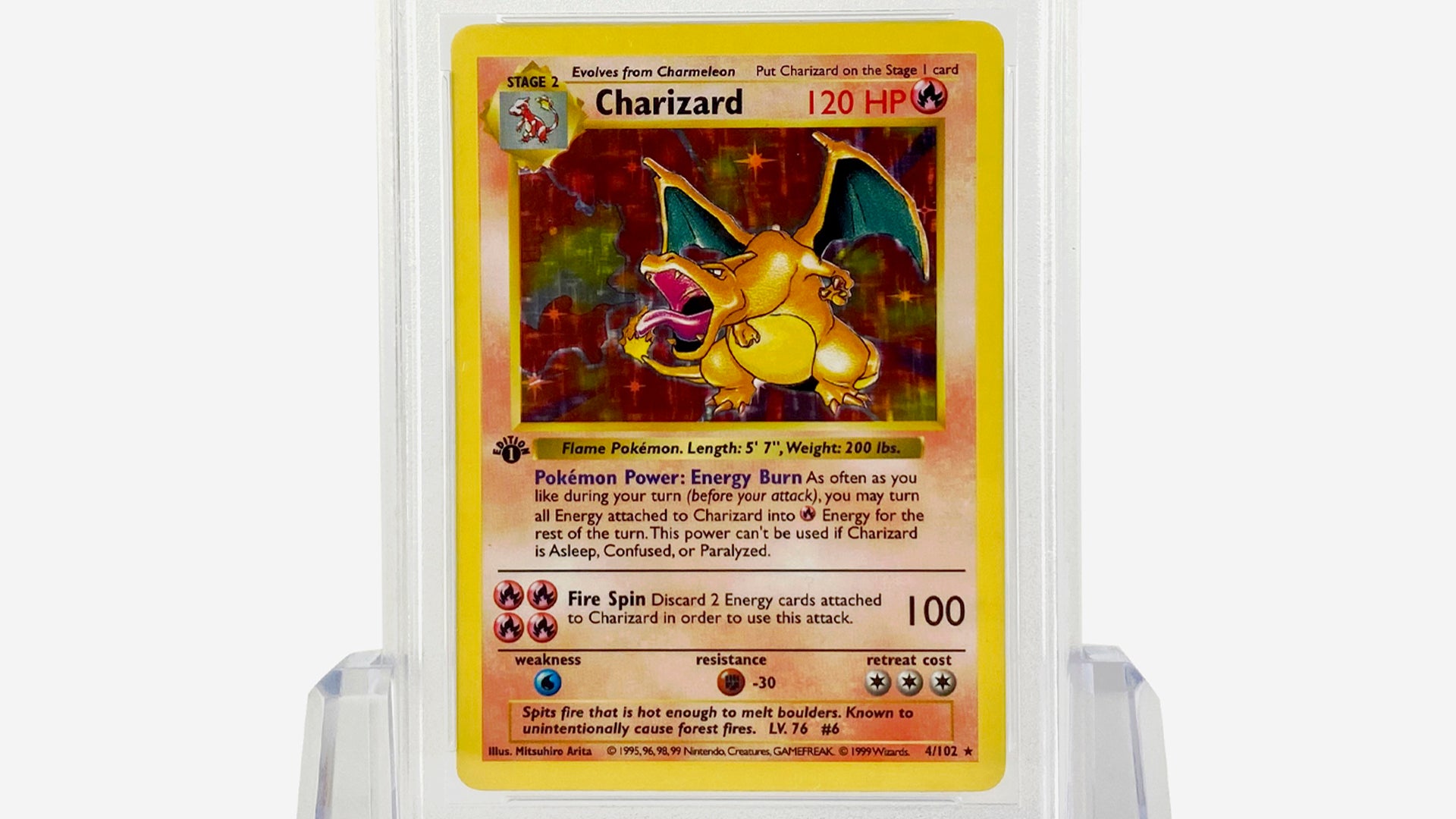 Shiny Charizard has been one of the Pokémon card game’s most popular cards since it first released in 1999, so there’s no surprise that 20-plus years later, it remains one of the most sought-after cards for collectors and fans alike.

While a number of first-edition cards from the Pokémon TCG’s early days are worth some money - assuming they’re still in good nick - due to their limited availability and age, this specific version of the holographic Charizard absolutely stands out as one of the rarest and most valuable Pokémon cards ever released.

What sets the card apart is the lack of a shadow underneath the fire-breathing dragon Pokémon. This was a printing error that was corrected for most of the cards printed, which makes the shadowless card all the rarer. According to auction house Iconic Auctions, the rare card is “the Holy Grail of Pokémon cards, the most iconic and important card to both the Pokémon franchise and its die hard fans”.

A mint-condition first-edition shadowless holographic Charizard sold at auction in October 2020 for a whopping $220,574 to retired rapper - and Pokémon fan - Logic, setting a new record for the already valuable card, according to card game outlet Cardhops. The figure may even make the shiny shadowless Charizard the most valuable Pokémon card of all time - a title contested by our next entry. Either way, it’s undoubtedly one of the rarest Pokémon cards out there.

Other super rare and expensive cards: 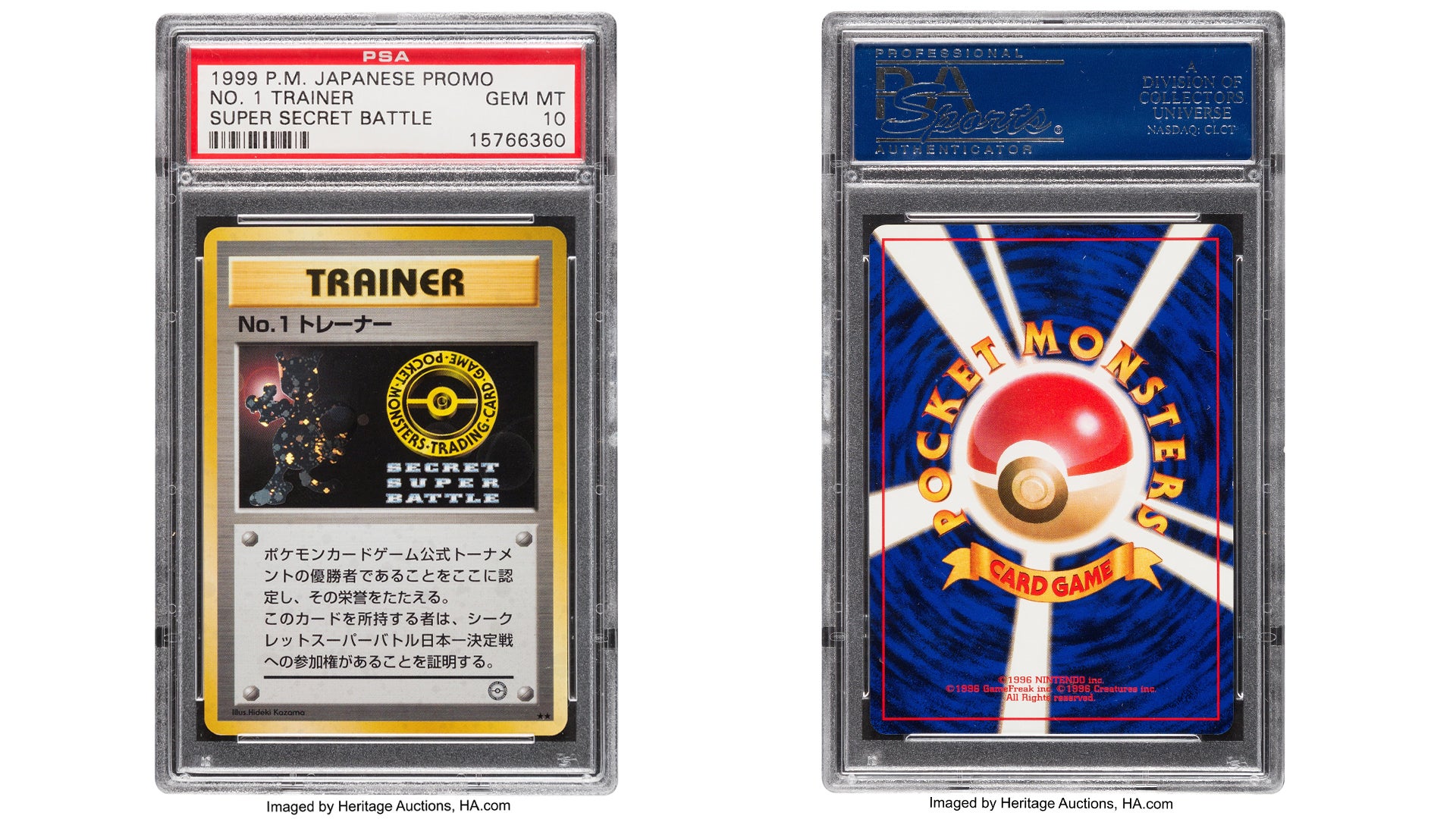 It’s unlikely you’ve heard of No. 1 Trainer, and extremely unlikely you’ve ever seen a copy in person. When it comes to rare Pokémon cards, they really don’t get rarer than this.

No.1 Trainer is a holographic promotional card awarded to finalists in the Secret Super Battle tournament held in Tokyo, Japan in 1999. To earn a place in the competition’s finals, which were held in a secret location, players had to first win a regional tournament. Their prize was the No. 1 Trainer card, which granted them access to the finals.

The card’s text translates to: “The Pokémon Card Game Official Tournament's champion is recognised here, and this honour is praised. By presenting this card, you may gain preferential entry into the Secret Super Battle.” The card features the Japanese logo for the “Pocket Monsters Trading Card Game”, along with artwork of original generation Pokémon Mewtwo by illustrator Hideki Kazama.

As only seven regional tournaments were held, it’s believed that just seven copies of the No. 1 Trainer card were made - easily making it one of, it not the, rarest Pokémon cards in existence. Six of the cards have since been certified as being in perfect Gem Mint 10 condition, with a flawless copy selling at auction in July 2020 for $90,000. At the time, Heritage Auctions - which organised the sale - described No. 1 Trainer as the “most sought-after card” in the Pokémon TCG, and a “Holy Grail” for collectors. Its counterpart cards No.2 Trainer and No. 3 Trainer, similarly awarded to winners in Japanese Pokémon tournaments during the late 1990s, are almost as rare and valuable. 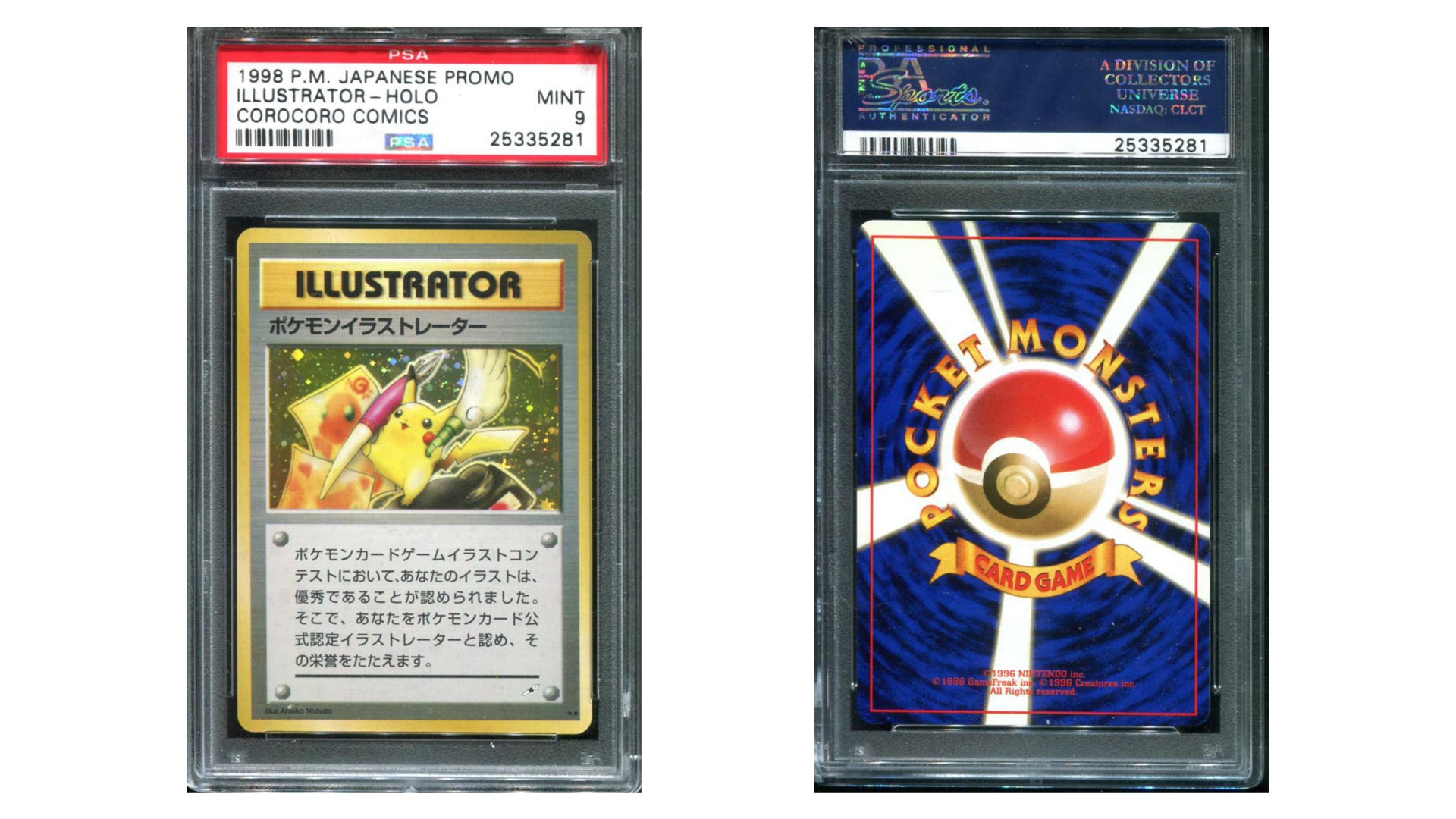 The current record holder for the world’s most valuable Pokémon card is also one of the rarest Pokémon cards ever made.

Pikachu Illustrator was originally given to winners of promo contests held in 1997 and 1998 by Japanese magazine CoroCoro Comic. 39 copies were officially awarded to the winners, while two copies were reportedly later discovered by one of the card game’s creators, seemingly bringing the total number of Pikachu Illustrator copies to 41.

As well as being ridiculously rare, the card is unique in a number of ways. It is the only Pokémon card to say “Illustrator” instead of “Trainer” at the top of the card, and has a one-off pen icon in its bottom-right corner to acknowledge its creation for the design contest. The card’s artwork of Pikachu is by Atsuko Nishida, the original illustrator of the fan-favourite Pokémon.

Approximately 19 copies of the card are believed to still exist, with 10 certified by the Professional Sports Authenticator (PSA) responsible for grading cards’ condition - although the actual number out there is disputed.

A near-flawless copy of the card graded at Mint 9 - one grade under perfect condition - sold at auction in 2019 for $195,000. That makes it the most expensive Pokémon card ever sold at auction according to Guinness World Records, though it may have since been surpassed by the shadowless Charizard. Regardless, Pikachu Illustrator is among the rarest Pokémon cards, with auction house Invaluable calling it “the most valuable and rarest Pokémon card in the world". 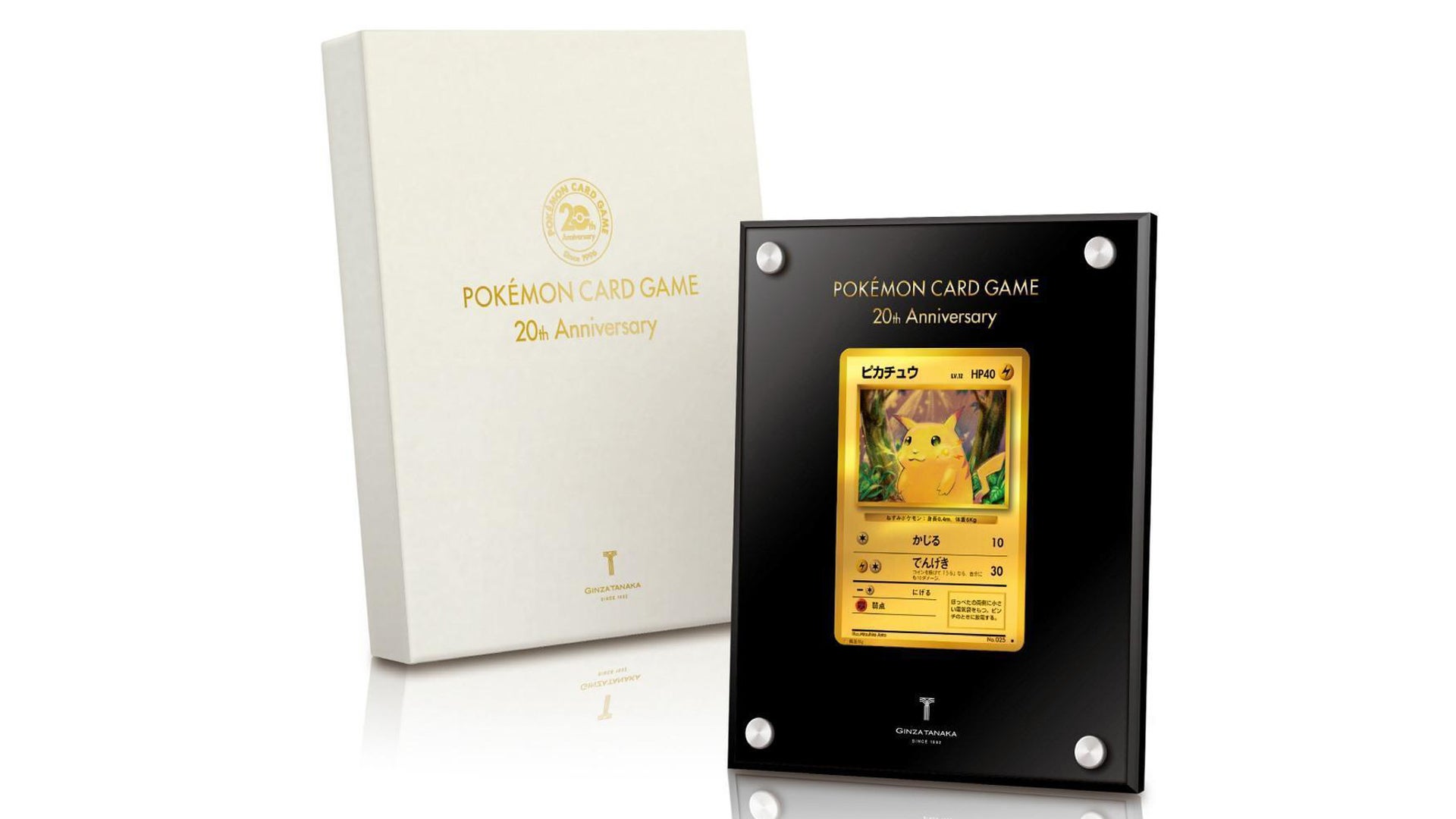 While many of the rarest Pokémon cards are cards released during the first years of the game, this card is an exception in that it appeared for the first time only a few years ago in 2018 to celebrate the Pokémon TCG’s 20th anniversary.

What makes the 20th Anniversary Pikachu card extra special is the fact it’s made out of solid gold. 11 grammes of 24-karat gold, in fact. Japanese jewellery maker Ginza Tanaka produced a limited number of solid gold cards based on the original Japanese Pikachu card - affectionately nicknamed ‘Fat Pikachu’ due to the electric mouse’s distinctive chubby cheeks.

The only way to get a copy of the golden Pikachu was to enter a lottery held in 2018. If you won, you were given the chance to buy a copy of the limited-edition card for 216,000 yen - or around £1,700. It came in a special frame and box marking the anniversary, which you’d hope might keep it safe given the price tag and rarity.

Although the card recreates the original Pikachu card - including the Pocket Monsters Card Game logo on the back and its Japanese text on the front - it’s not legal for use in tournaments. You know, because it’s made of gold. We probably wouldn’t recommend trading it in the schoolyard either, unless your friend has a couple of grand in pocket money. 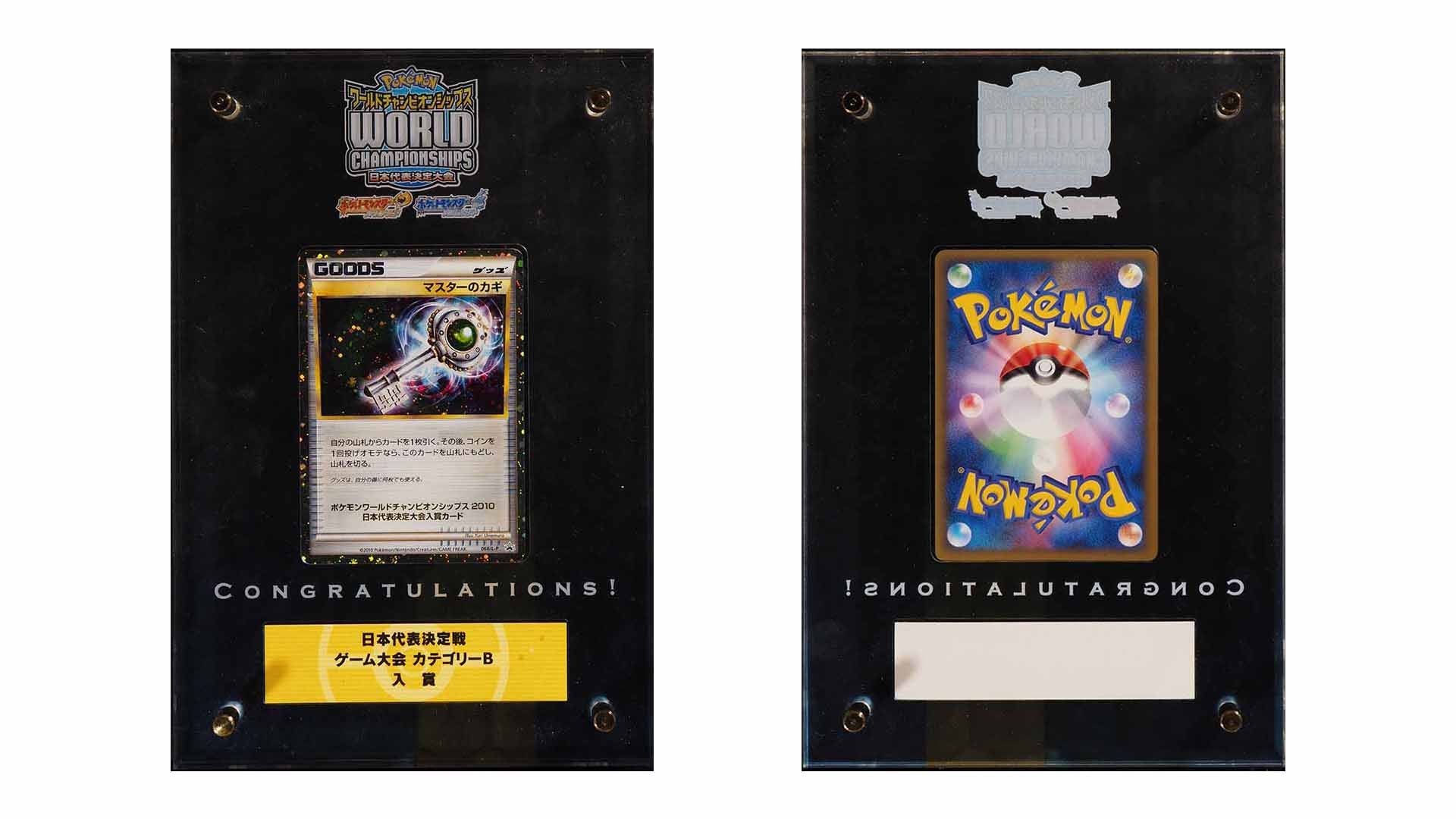 Master’s Key is another rare Pokémon card awarded to participants in a Pokémon TCG tournament. However, unlike No. 1 Trainer and its ilk, this card is a little more recent, being given to competitors in the 2010 Pokémon World Championships held in Hawaii.

Both those participating in the trading card game tournament and its video game counterpart received a copy of Master’s Key - the cards were identical, but came presented in a different trophy case frame depending on the category.

Only 36 copies of the card are estimated to exist - equal to the number of participants in all age divisions of the world championships.

A copy of the Master’s Key card sold at auction in November 2019 for more than $21,000, highlighting how valuable the rare prize card is. 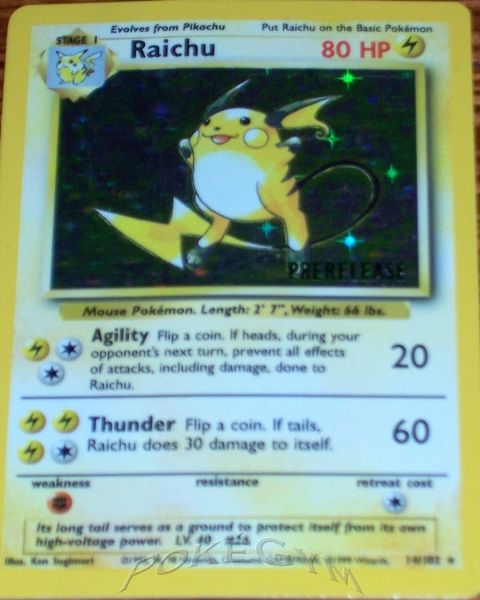 Perhaps the most controversial Pokémon card of all time, Prerelease Raichu may also be the rarest Pokémon card ever made - in fact, it’s so rare that finding out exact details is tricky.

Prerelease Raichu was long rumoured to be a card printed by error in the run-up to the English-language release of the Pokémon TCG’s second expansion, Jungle, in 1999. So the story goes, a very small number - said to approximately 100 - of Raichu cards from the game’s Base Set were accidentally reprinted with the word “Prerelease” stamped in the bottom-right of the card artwork. The game’s English manufacturer, Wizards of the Coast, reportedly destroyed all but a fraction of the copies, leaving 10 or fewer in the wild. The few remaining copies are believed to have been given to Wizards of the Coast staff.

For years, Prerelease Raichu was only rumoured to exist, until a copy believed to be genuine surfaced from a former Wizards of the Coast employee in 2006. In 2009, the first and seemingly only recorded sale of a Prerelease Raichu was reported by fan site PokeGym, apparently changing hands for $10,500. However, given the completion date of April 1st, whether the sale was real or an elaborate April Fool’s prank remains dubious.

Whether Prerelease Raichu actually exists remains in contention - no copies of the card have even been professionally certified or sold at auction, despite a number of apparent fakes popping up over the years. If a legitimate copy of the card were to surface, it may well set a new record for the most valuable and rarest Pokémon card of all time. Until then, it will remain a true Holy Grail.