Final Resting Place Of Shih Tzu Was A Trash Compactor​

Our pets are one of the most important things in our lives. When they breathe their last, the last thing we’d do for them is to ensure that their final resting place is beautiful and dignified.

Unfortunately, a family in Singapore found out that the body of their Shih Tzu Cindy, who passed away at a void deck in Toa Payoh, had been thrown into a trash compactor.

Source: Facebook
Devastated, they contacted various authorities, seeking an explanation and some accountability. One of the owners later shared that the Bishan-Toa Payoh Town Council has reached out to them to organise a meeting.

The family hopes for better protocols to be implemented to ensure something like this wouldn’t happen again.

On Thursday (26 May), the owner of the Shih Tzu posted to Facebook, describing the ordeal he and his family faced.

According to the post, his family’s pet dog Cindy went missing on the morning of 25 May. She was later allegedly found by members of the public at the void deck of Block 214 Lorong 8 Toa Payoh, having passed away due to an incident.


The OP and his family were at work and only got to know of the news upon their return. They promptly searched for Cindy and her collar, handing out flyers as well.

At 1.55pm, they received a call along with a picture confirming it was indeed Cindy at the void deck.

The Essential Maintenance Service Unit later informed the family that Bishan-Toa Payoh had taken away Cindy’s body. However, they did not disclose where the town council transported her.

The family’s situation took a turn for the worse when they learned what happened to poor Cindy’s body.

After calling the Bishan-Toa Payoh town council for more information on Cindy’s location, they were told that the Shih Tzu’s body had been disposed of the day before in a trash compactor as no one had come forth to claim her.

However, the OP pointed out that Cindy’s collar had her name, licence, his father’s name and contact details. Furthermore, Cindy was microchipped.

“SPCA, AVS and my family were not contacted at all,” the OP said. “No efforts were made to check the collar as the collar was still at the same spot at 7pm.” 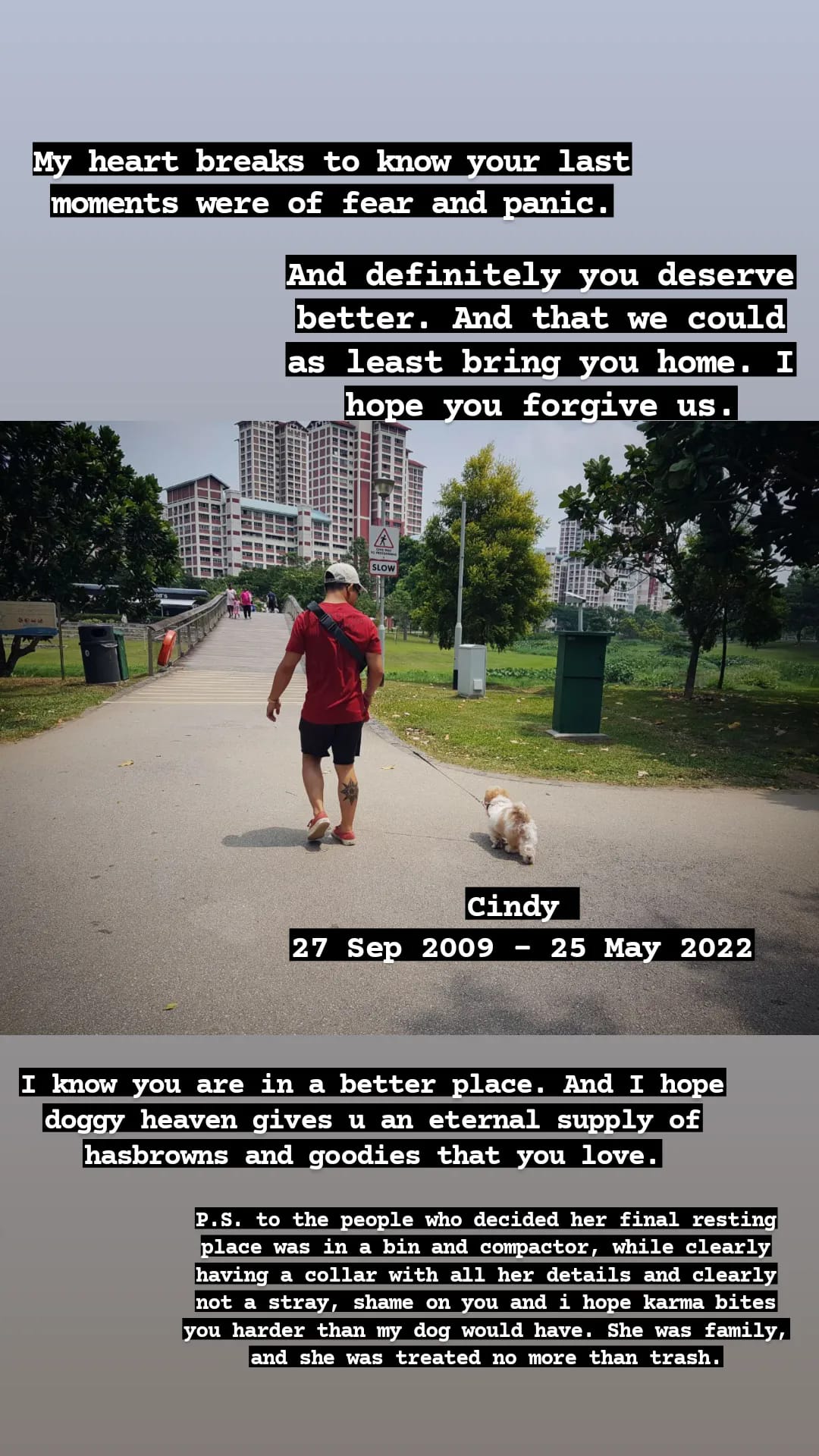 Source: Facebook
The OP’s sister and mother have managed to find the cleaner, town council officer and supervisor of the trash disposal area nearby responsible for the incident.


But they were still unable to retrieve the body.

In light of the ordeal, the OP sought accountability from the town council by filing a complaint with AVS. 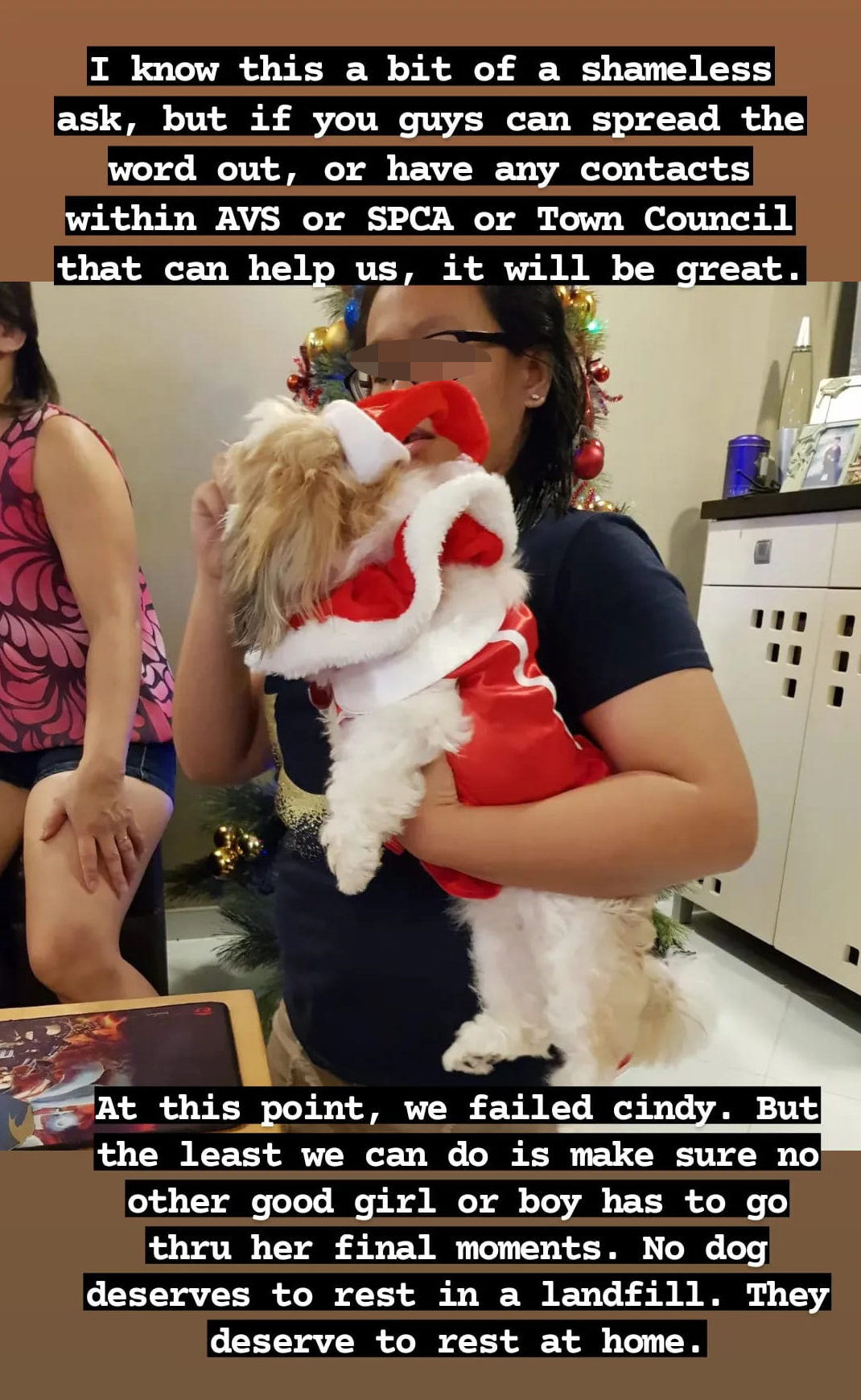 “My family and I demand some answers on why did this happen. This is no way to treat our pets, even if they have passed.”

According to the OP, both SPCA and the Bishan-Toa Payoh Town Council have reached out to his family. 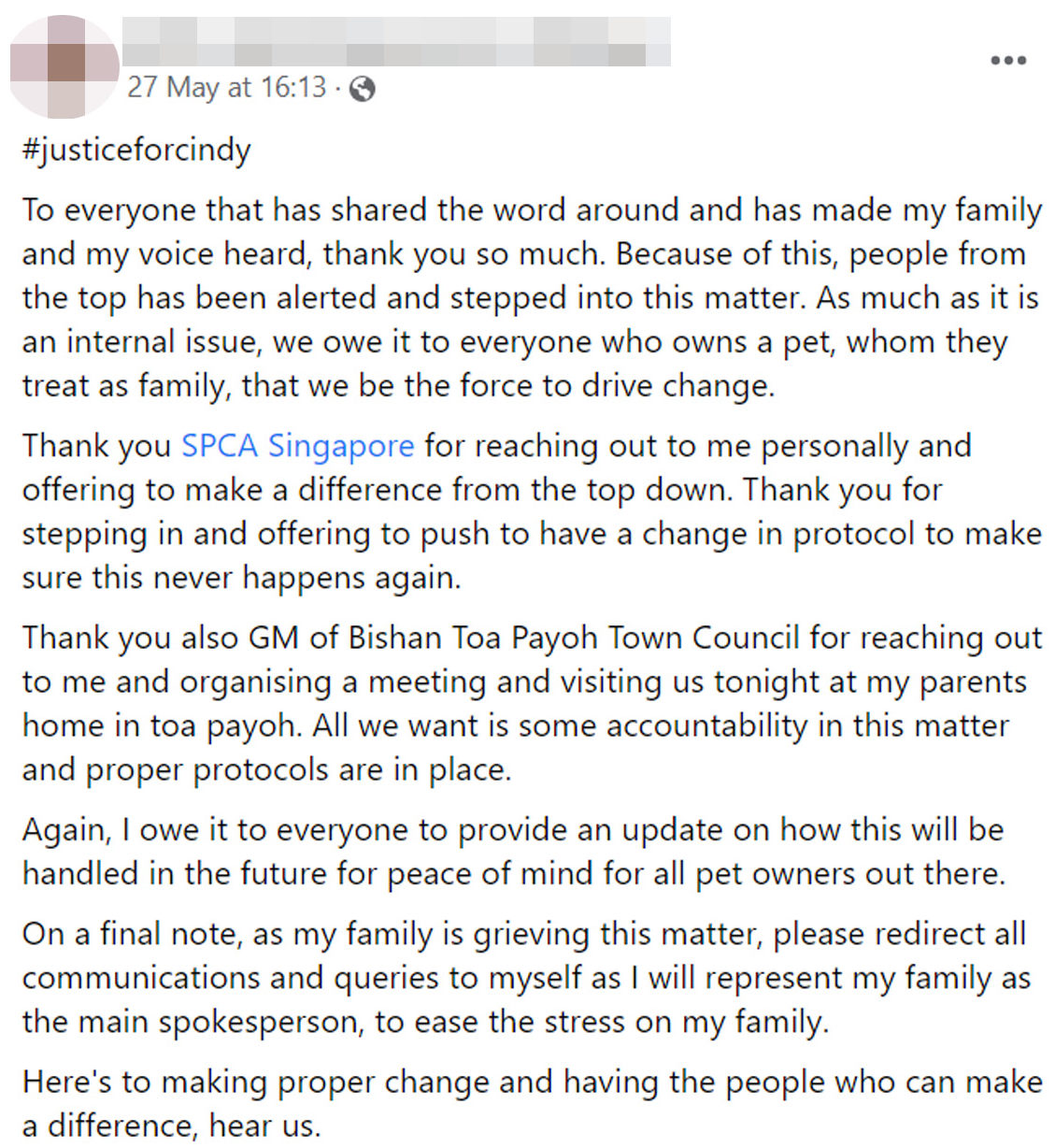 Source: Facebook
SPCA offered to push for a change in protocols to ensure such incidents never occur again.


The general manager of the town council also organised a meeting with the OP and his parents to provide reassurance.

MS News has reached out to AVS and the Bishan-Toa Payoh town council for more information.

Our pet animals are treasured members of our family and society as well. They deserve to be treated with as much dignity as anyone else would when they pass on.

We express our deepest condolences to the family for their loss. To have to deal with such disrespect on top of their grief must be plenty heartbreaking indeed.

Hopefully, the town council will be able to prevent such unfortunate treatment from occurring to any other pets in the future. 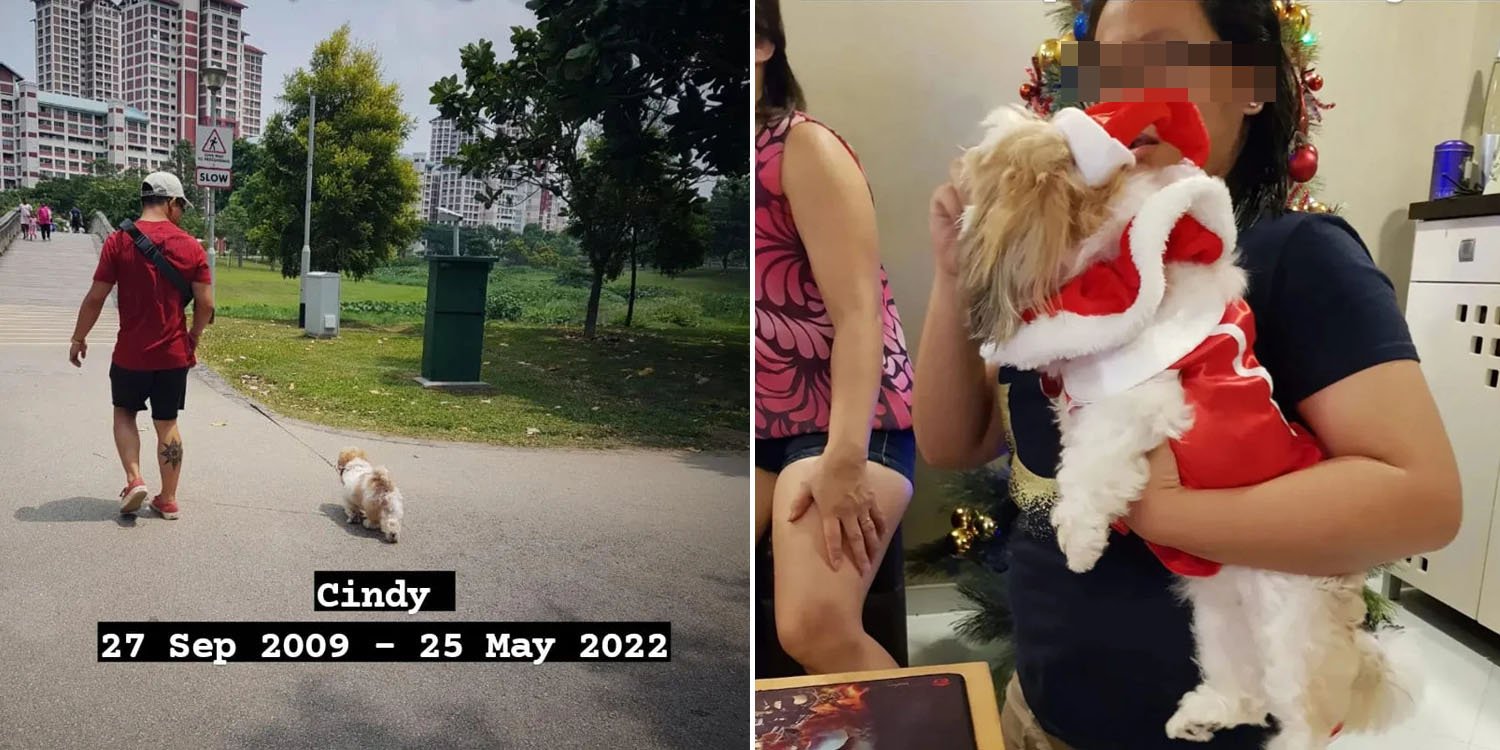 How come owner go to work, never lock dog up???? If family, you will do that?? LoL

much as callous the town council is, how did the dog ended up dead outside of their place when noone is home?

The dog escaped from their house?

Sounds like they avoiding the bigger issue and re-directing their guilt at other things.

the dog is better off dead than be alive in the hands of this irresponsible owner. the dog is definitely in a better place now. they need to be banned from owning pets

I support throwing dead escaped or unclaimed dogs from irresponsible owners into the trash compactor. 100% support town council on this.

Why should taxpayers monies be used to fund irresponsible owner's pets cremation?

so the owner want a national state funeral with 21 gun salte for the dog?
K

So owner no leash it how?

really bth all these BS.

Either abandon, abuse or negligence cause death
X

The dog can die in the void deck mean no one take care lor ... can blame who? Blame the dog itself lor... even if hot pple inform their dog died in the void deck... will find something/someone to blame...
R

If the town council don't know who is the owner, pay money and go give it a proper burial. Who is going to pay for it if ultimately the dog owner nowhere to be found. And worst still owner refuses to pay for it later. Their mindset is really self entitled.

where the original sauce
M

knn look after dog is not the job of TC ...
rich ppl really create more problems
next time bring the "family member" to work

Sinkie pet owners put the blame on others

really dunno what the owners expect.. they treat the dog like trash by letting it escape. of course the dog gets disposed like trash

hope they will be held accountable and not the TC. i am 100% on the TC's side
You must log in or register to reply here.
Share:
Facebook Twitter Reddit Pinterest Tumblr WhatsApp Email Share Link
Important Forum Advisory Note
This forum is moderated by volunteer moderators who will react only to members' feedback on posts. Moderators are not employees or representatives of HWZ. Forum members and moderators are responsible for their own posts.