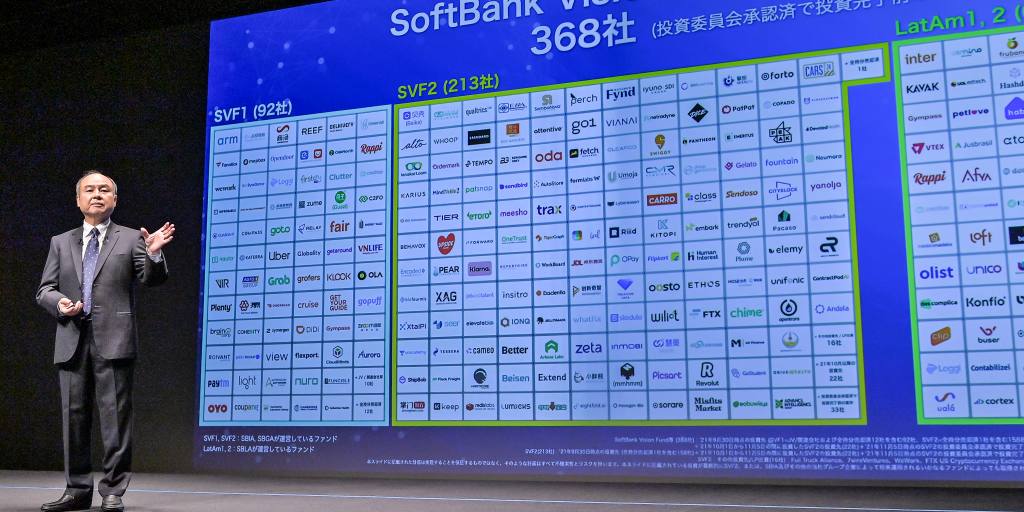 TOKYO -- SoftBank Group swung to a net loss in the July-September quarter due to share price declines in some of its key investments, including South Korean e-commerce player Coupang and Chinese ride-hailer Didi Global.

SoftBank also said it will buy back up to 1 trillion yen of its own shares until Nov. 8, 2022 "to realize fair shareholder value by rectifying the situation where [SoftBank] shares are traded at a deep discount" to the value of its assets.

SoftBank is "in the middle of a midwinter storm," Chairman and CEO Masayoshi Son said during a news conference on Monday.

The loss on its investment in Coupang came to 1.2 trillion yen for the April-September period. The Vision Fund held a 36.8% stake in Coupang when it went public in the U.S. in March. But its market capitalization declined from about $72 billion at the end of June to about $48 billion at the end of September, according to FactSet data. The Vision Fund sold a part of its stake for a profit, but the value of its remaining stake fell sharply.

Didi accounted for another 321 billion yen loss. The Vision Fund put about $12 billion into Didi for a 20% stake. Days after Didi went public in the U.S. at the end of June, it was forced to halt signing up new customers as Chinese regulators began investigating the company, citing data security concerns. Shares fell 45% between July and September, reducing the value of SoftBank's stake to about $7.5 billion at the end of September, according to FactSet data.

Some of the losses were offset by the sale of some shares in Coupang as well as in U.S. companies Uber Technologies and food deliverer DoorDash. Valuations of some unlisted portfolio companies rose from a year earlier.

Son said the Vision Funds "are successful enough," pointing to a 5.9 trillion yen gain since their inception. He said 18 portfolio companies have gone public this fiscal year and another 13 have announced plans to list, including through special purpose acquisition companies, by the end of March.

"While I am concerned about the situation in China, new [artificial intelligence] companies continue to emerge. We will continue to invest in them," Son said. He noted that the value of investments in China have already declined. "The China risk is not extremely high. It is manageable," he added.

The two Vision Funds and the Latin America fund has invested in 368 companies, including those that have been approved but not completed. Son said the group will "make a series of small strikes in a well-balanced manner in terms of regions and themes," including in fintech and biotech.

"I want to constantly invest trillions of yen every year," Son said.

As for share buybacks, Son said the discount to the company's stock price has reached 50-60% apiece. "As a shareholder, I will take this situation and make it a happy news. In the storm, the stock price is much lower than its actual strength. Now is the chance."

Son cautioned, however, that "we also have to operate safely, so we may not be able to complete a 1 trillion yen buyback within a year."

SoftBank also generated a profit from the sale of shares in U.S. telco T-Mobile to German peer Deutsche Telekom.
You must log in or register to reply here.
Share:
Facebook Twitter Reddit Pinterest Tumblr WhatsApp Email Share Link
Important Forum Advisory Note
This forum is moderated by volunteer moderators who will react only to members' feedback on posts. Moderators are not employees or representatives of HWZ. Forum members and moderators are responsible for their own posts.