Why Germany and Austria mandate a vaccine that did not prevent new wave of covid cases?

Bcos this is a very unique vaccine.

Maybe influenced by sg, who jinxed them.

Because with the current trajectory, they are rapidly descending into a state where any single bit of help ish important, regardless of how good it ish.

Our excess death rates may be higher than Austria or Germany. We haven't yet published October and November excess mortality numbers 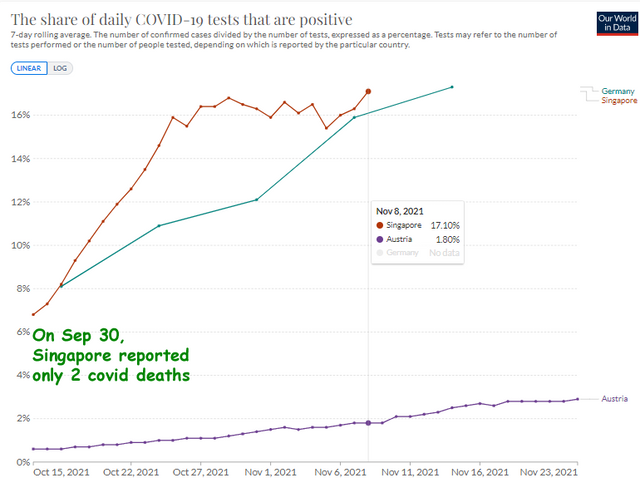 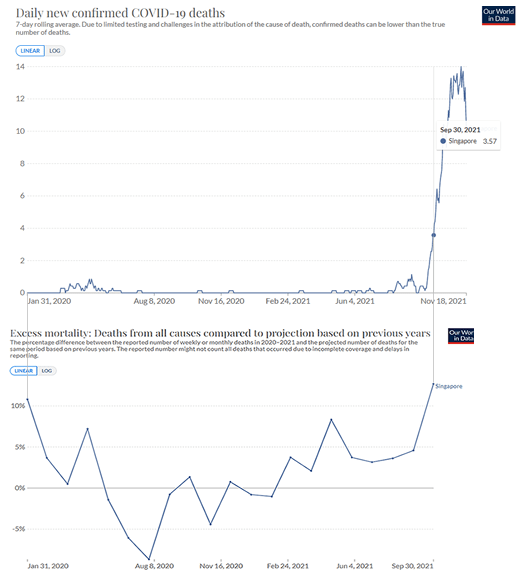 coern said:
they mandate cos Austria still got 35% unvaxxed; Germany got 32% unvaxxed.

the vaccine holdouts are driving the latest wave of hospitalisations...


Germany’s health minister has issued a stark warning to the country’s public, telling citizens that vaccination was the key to their survival.​
​
“Some would say this is cynical but probably by the end of this winter, pretty much everyone in Germany will be vaccinated, recovered or dead ... That’s the reality,” Jens Spahn told a press conference in Berlin on Monday.​
Click to expand...

So almost 7 in 10 vaccinated and its still not enough to see any results? At what point will the vaccine start working …? In sg it is almost 9 in 10 vaccinated. When does it start ending the pandemic?

I am in this thread to laugh at Threadstarter and ignorant EDMW kum gong kias.

The case to impose safety measures on unvaccinated remains strong :

ODACHEK said:
Tell the ministers to do that they will order special PPE and triple up masks first.
Click to expand...

will spray disinfectant gao gao before they arrive

Senior-citizen said:
Our excess death rates may be higher than Austria or Germany. We haven't yet published October and November excess mortality numbers

You obviously do not have a good foundation understanding of statistics and do not know what the underlying statistical reasons for Singapore high numbers are.

That is why I see you keep quoting those statistics in many of your posts without even knowing that it shows how little you understand them statistically.

How the hell Goebbels have grandchildren??????

cos they don't know what else to do liao

USA will come after you if you are not vaccinated.

BHills said:
You obviously do not have a good foundation understanding of statistics and do not know what the underlying statistical reasons for Singapore high numbers are.

That is why I see you keep quoting those statistics in many of your posts without even knowing that it shows how little you understand them statistically.
Click to expand...

twinkle07 said:
ish not about vaccine anymore...ish about control

told u guys long time ago... it's now a matter of flexing muscles, showing u who is in control...

ohsinga said:
The history is that they're quick to drop the covid safety measures when infection cases dropped

It's not abt vaxxed / unvaxxed, as we know vaxxed can be infected n spread infection.
Click to expand...

false sense of security
A

gladtoknowmore said:
lol it’s like asking why did the law that require all motorcyclists to wear a helmet did not prevent them from being hit by a car. they are two totally different things right? the helmet protects one from serious injuries/ death if one’s hit by a car, but doesn’t prevent u from the accident altogether.

helmet can see can touch, can choose what colour what model what type to wear.. can even remove anytime.. but the jab you cannot see what in it, what the thing do to your body inside you. one is non-invasive protection, the other is invasive protection, and that is the cause for concern for something that is still experimental and not matured

This covid exposes the fact that angmoh are stupid.
Darwin awards on its way liao.

jameskenrek said:
Bcos this is a very unique vaccine.

Looks like a cult practice of mass suicide in the making........
You must log in or register to reply here.
Share:
Facebook Twitter Reddit Pinterest Tumblr WhatsApp Email Share Link
Important Forum Advisory Note
This forum is moderated by volunteer moderators who will react only to members' feedback on posts. Moderators are not employees or representatives of HWZ. Forum members and moderators are responsible for their own posts.