Drop 7%... Tesla fanboys got any magic to avoid learning backstroke at Bedok reservoir? 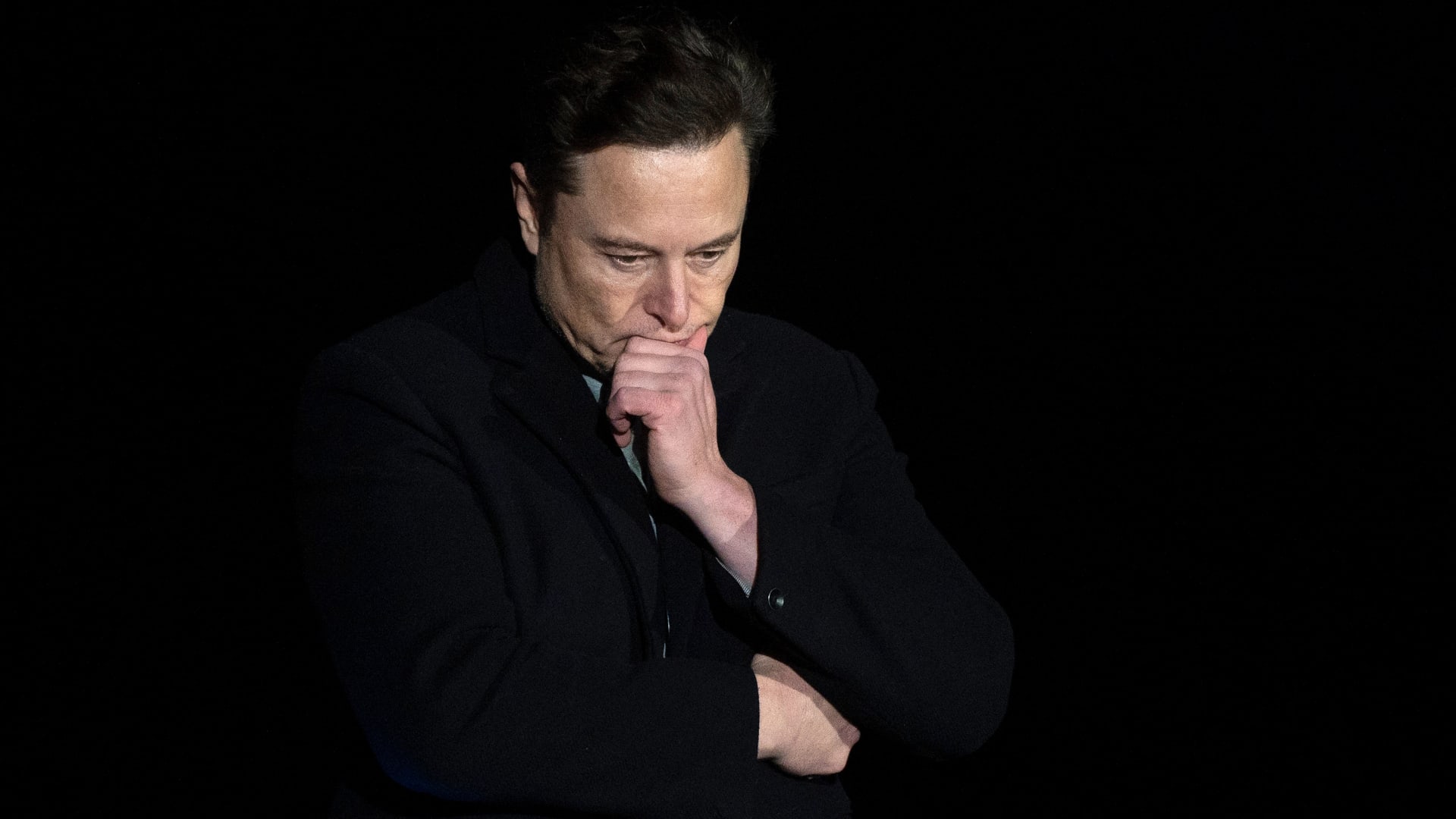 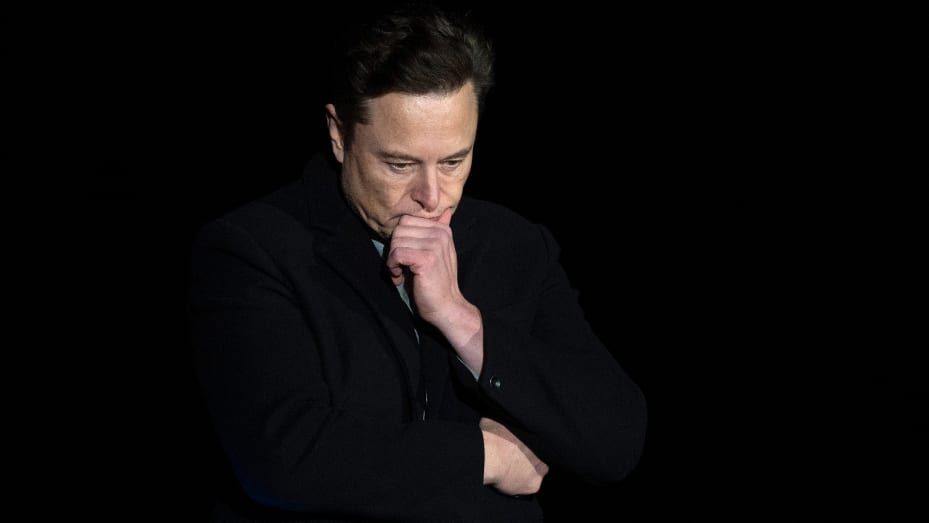 In May, electric-vehicle maker Tesla was removed from the S&P 500′s ESG Index. In response, CEO Elon Musk tweeted that ESG was “a scam” that had been “been weaponized by phony social justice warriors.”
Jim Watson | AFP | Getty Images

Shares of Tesla slid about 7% early Monday after the electric vehicle maker released third-quarter production and delivery numbers on Sunday that fell short of analysts’ estimates.

Tesla reported 343,000 total deliveries and 365,000 vehicles produced during the quarter, which missed analysts’ expectations of 364,660 vehicles delivered, according to estimates compiled by FactSet-owned Street Account. Deliveries are the closest approximation of sales reported by Tesla.
---------------
Last edited: Oct 8, 2022

A company stock's true test is during a recessionary environment. Now it's true colour come out riao.
Time to return back to its real intrinsic value, LOL. 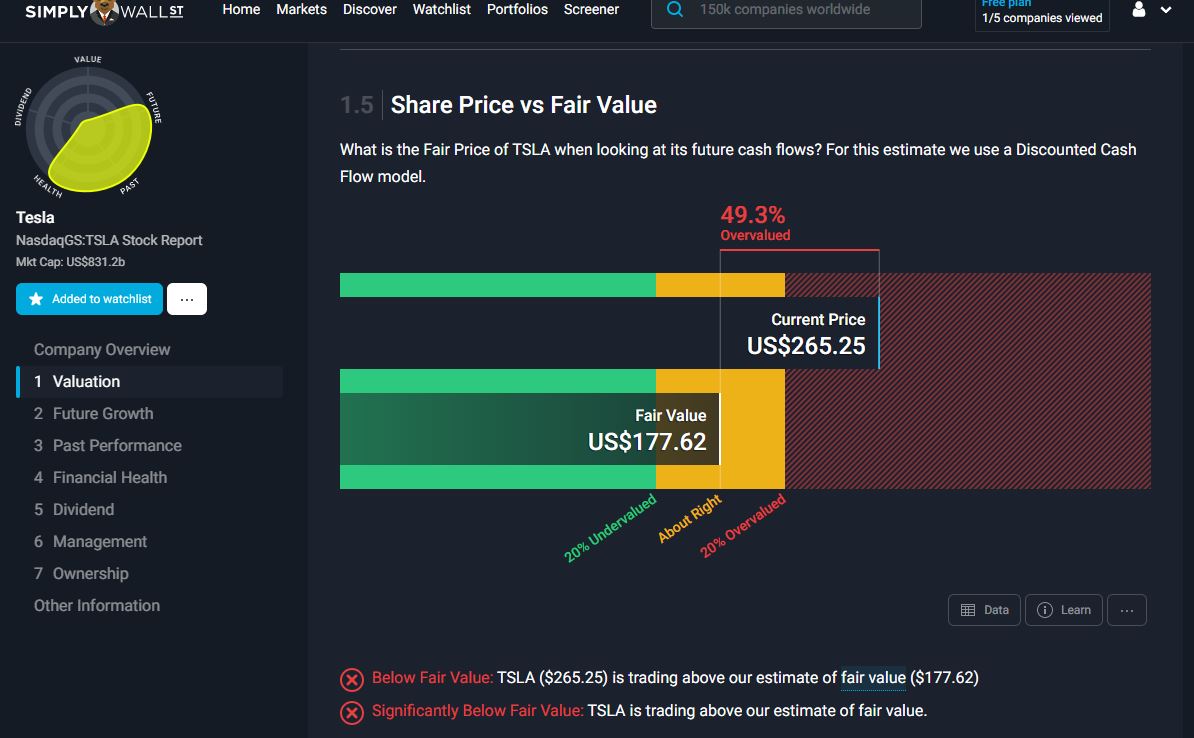 Twitter trial in mid October. Elon very likely to lose. Only the most kumgong of investors would buy TSLA now.
L

Those that buy early alr realised profits when high. Those that brought lower on the way down, will have chance in future. Dun woory too much.

Find the latest Tesla, Inc. (TSLA) stock quote, history, news and other vital information to help you with your stock trading and investing. 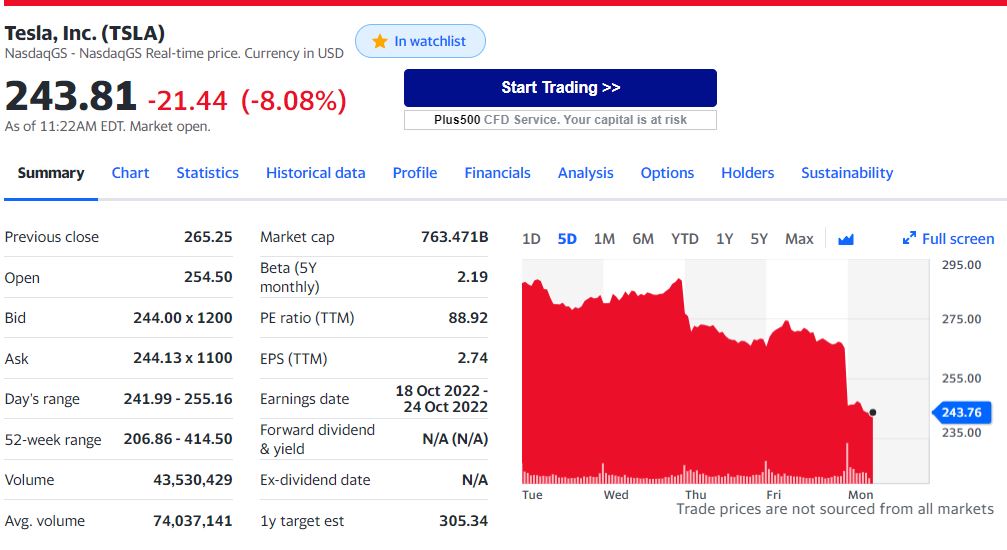 VIX is dropping tonight, most stocks rise except Tesla. This is freaking bizarre, for those who follows Tesla stock closely will know that this has never happened before in recent years. 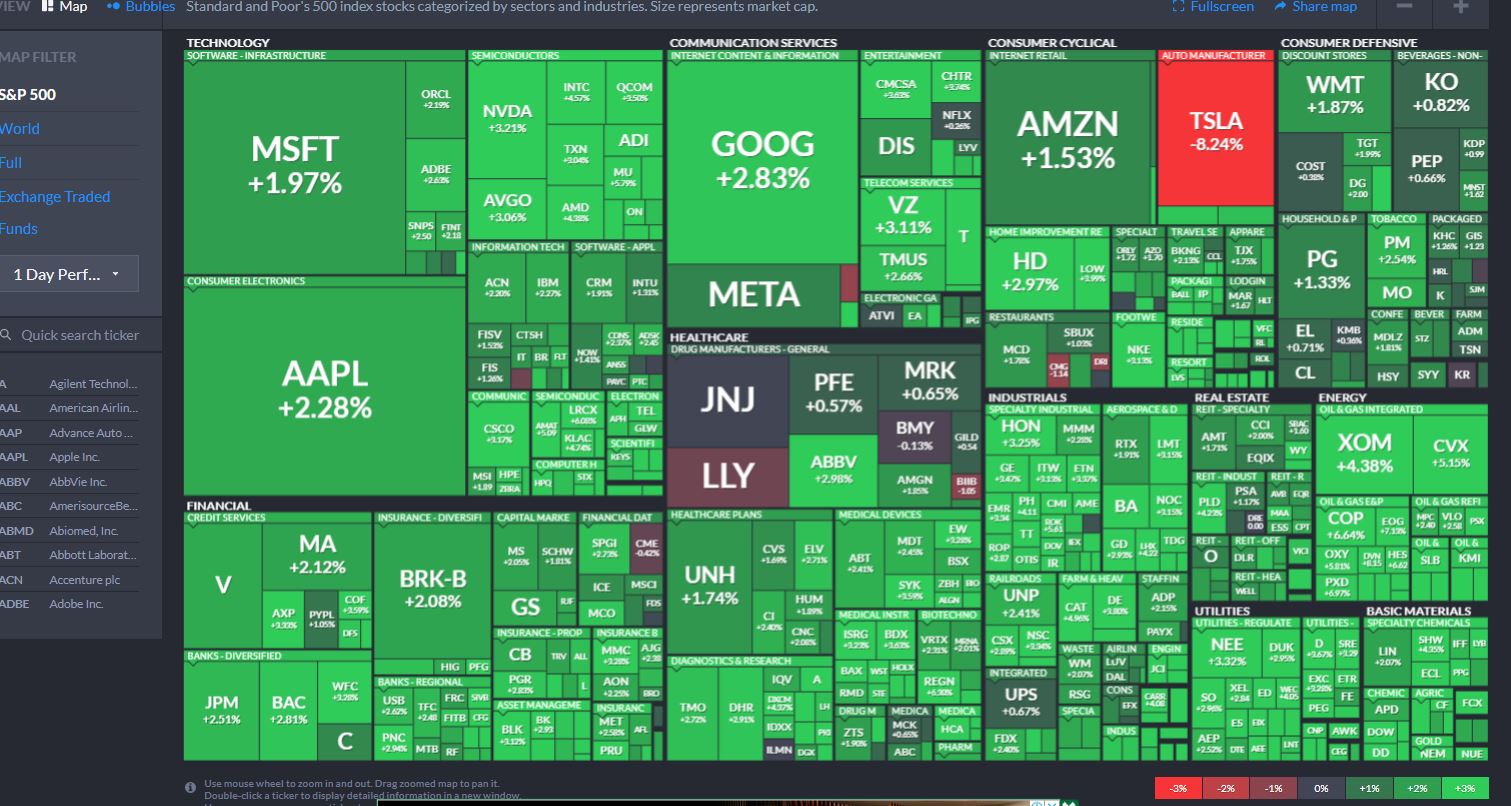 Means overvalued. Tesla is just one of the many many companies making EV

Find the latest Tesla, Inc. (TSLA) stock quote, history, news and other vital information to help you with your stock trading and investing.

Please baghold for Papa Elon.. he needs that liquidity to buy twitter. He's champion of free speech, okay.. so TSLA fanbois should have no qualms bagholding for musk.

Tesla fanboys should baghold and rejoice as now Elon goes bonkers with a out of this world AI Bot... who knows? Might go to the moon hitting $1000 very soon! 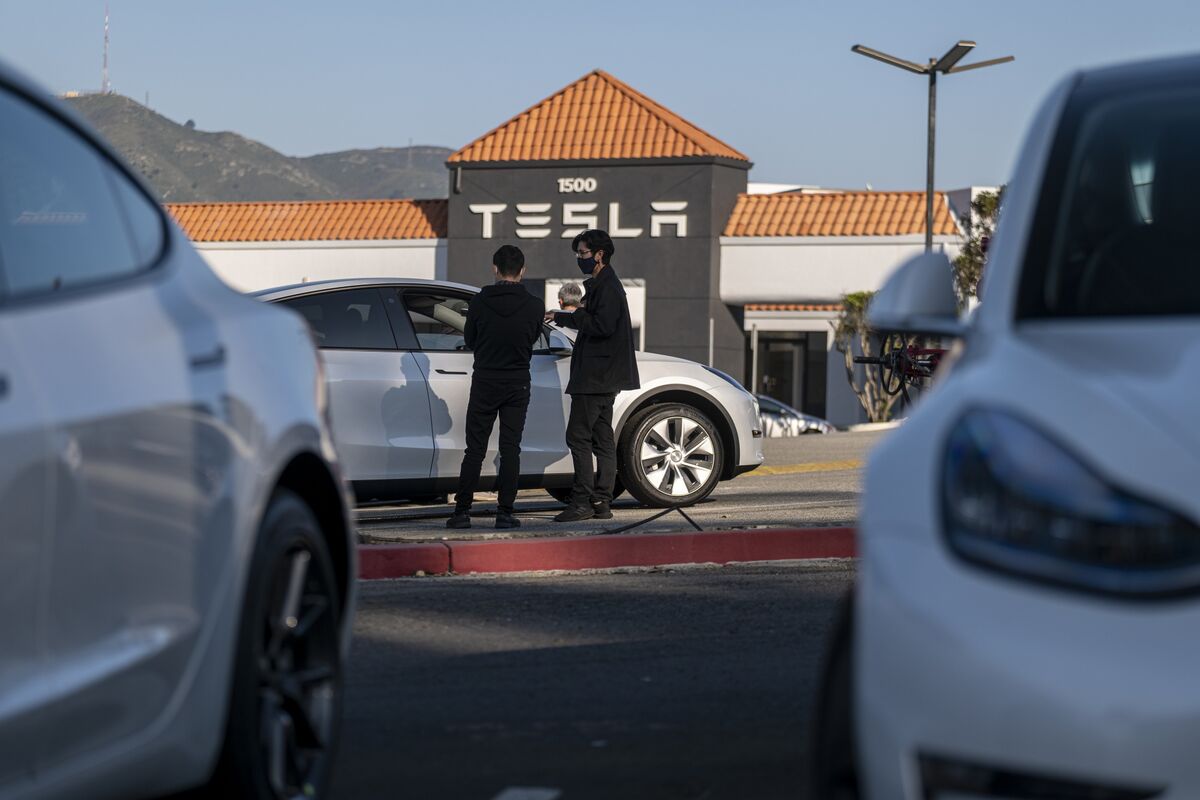 For all the stock market gyrations this week, one company’s performance stands out beyond all others: Tesla Inc.

Tesla’s stock has plunged 16% over the five sessions, marking its worst week since March 2020’s Covid-stricken market selloff. Meanwhile, the S&P 500 Index is headed for its best week in a month as it’s up 1.9% on the strength of powerful rallies on Monday and Tuesday. Tesla is by far the biggest weight on the S&P this week, dragging the index down roughly 13 points.

The EV-maker’s issues are no secret. It has been battered by the one-two punch of disappointing quarterly deliveries and Chief Executive Officer Elon Musk’s surprise decision to revive his offer to buy social-media platform Twitter Inc. The Twitter deal comes with the possibility that Musk will be forced to sell Tesla shares to finance the deal. 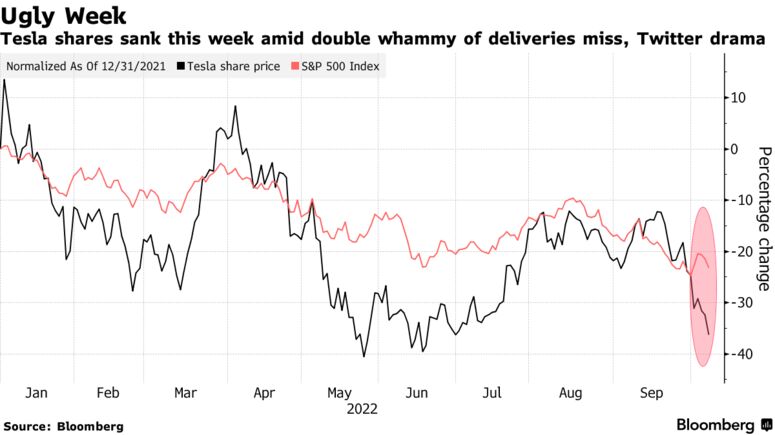 For ardent Tesla fans like ARK Investment Management’s Cathie Wood, the selloff offers a chance to buy more of the stock at its cheapest price in months. The growth-stock guru, whose funds have been hit hard this year amid soaring inflation and rising interest rates, snapped up shares worth about $32 on Monday. Mom-and-pop traders were also big buyers, with nearly $540 million in net purchases over the past five trading days, Vanda Research said.

On the flipside, there are more cautious investors, who say the stock has several hurdles to navigate before finding a clear runway. A looming recession, growing threat of competition, a wary consumer squeezed by high inflation and the stock’s expensive valuation are the biggest worries.

Musk’s purchase of Twitter adds a few more wrinkles. In addition to the uncertainty around the deal’s financing, investors are also worried that the billionaire could be pushing himself beyond his limits with so many demanding ventures.

“Musk will need to ‘justify’ the valuation he paid for Twitter by generating value as soon as possible, this will take his time and focus away from running Tesla,” said Brian Mulberry, client portfolio manager at Zacks Investment Management. “Musk may be a genius businessman, but he is still a human being and a day is still only 24 hours long.” Zacks owns Tesla stock through its All-Cap Core fund.

Meanwhile, even with this selloff, Tesla continues to tower over Big Tech and most of the S&P 500 with its eye-watering valuation. Tesla shares are trading at 51 times the company’s estimated forward earnings. By comparison, the S&P 500 trades at an average of 16 times, and Apple trades at 23 times.

All that being said, there is a reason why Tesla has such a lofty valuation. It’s about the future. Tesla’s dominating position in the still nascent and fast-growing EV market makes it dangerous to bet against, particularly in a global economy that will soon be powered by green energy. And Musk, for all the distractions pulling at him, is committed to making the company a success.

“Tesla is unique among US big tech right now because it has a much clearer fundamental growth trajectory than any other name. It also has the largest ‘key man’ risk of any stock in the S&P 500,” said Nicholas Colas, co-founder of DataTrek Research. “Musk’s attention to Tesla is worth a lot to many investors.”
----------------

@EdenHazard priest take notes
You must log in or register to reply here.
Share:
Facebook Twitter Reddit Pinterest Tumblr WhatsApp Email Share Link
Important Forum Advisory Note
This forum is moderated by volunteer moderators who will react only to members' feedback on posts. Moderators are not employees or representatives of HWZ. Forum members and moderators are responsible for their own posts.